Skip to content
Thanks for checking English by Steviekins96. 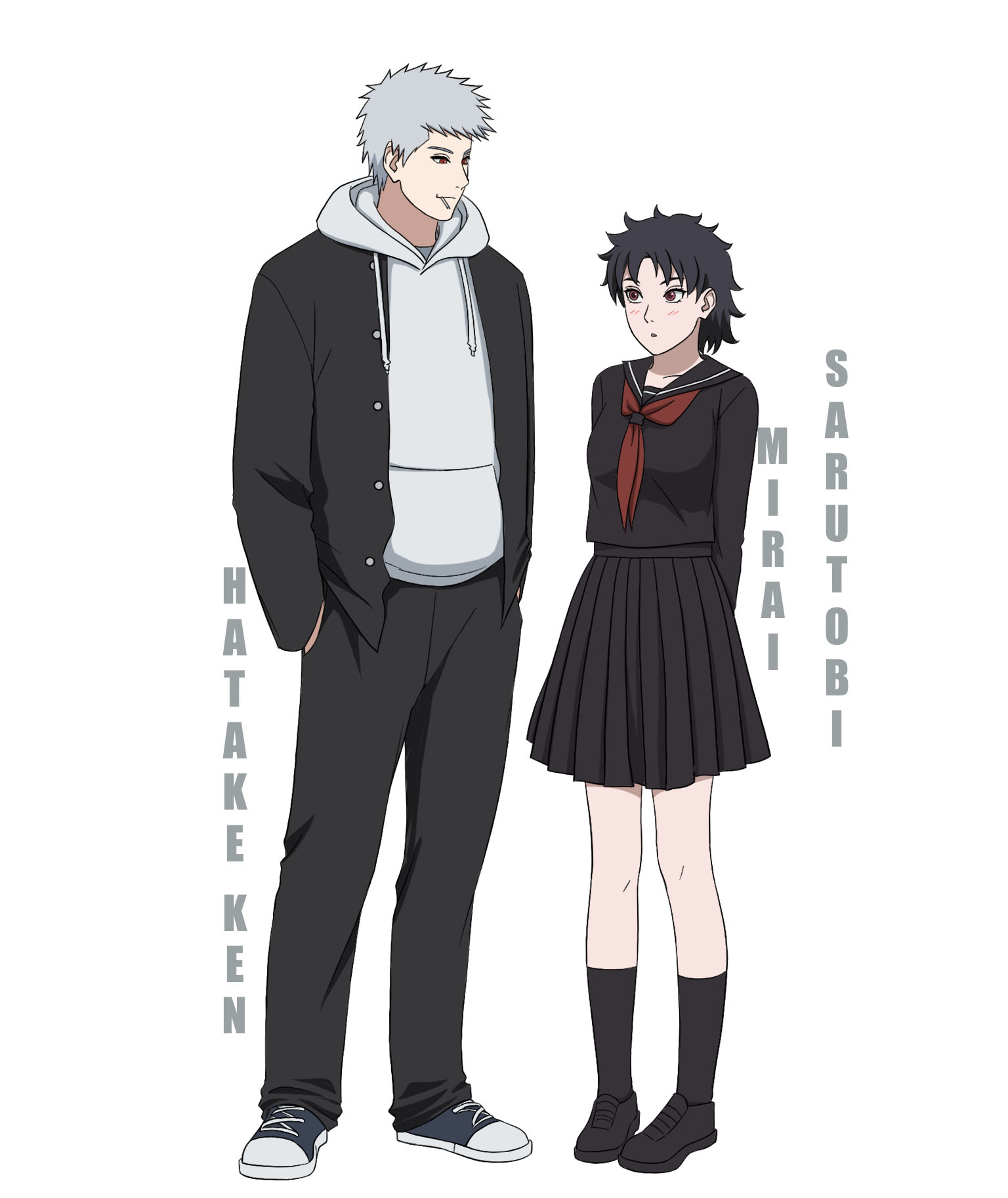 Ken = Playboy (He’s known as the hot handsome boy in school. Not only is he smart but he’s also pretty good at sports. Unfortunately, Ken’s really lazy.)

Mirai = Dedicated girl (She’s the smart one who always gets high exam scores. Mirai is secretly in love with her senpai (Ken) for a long time.) 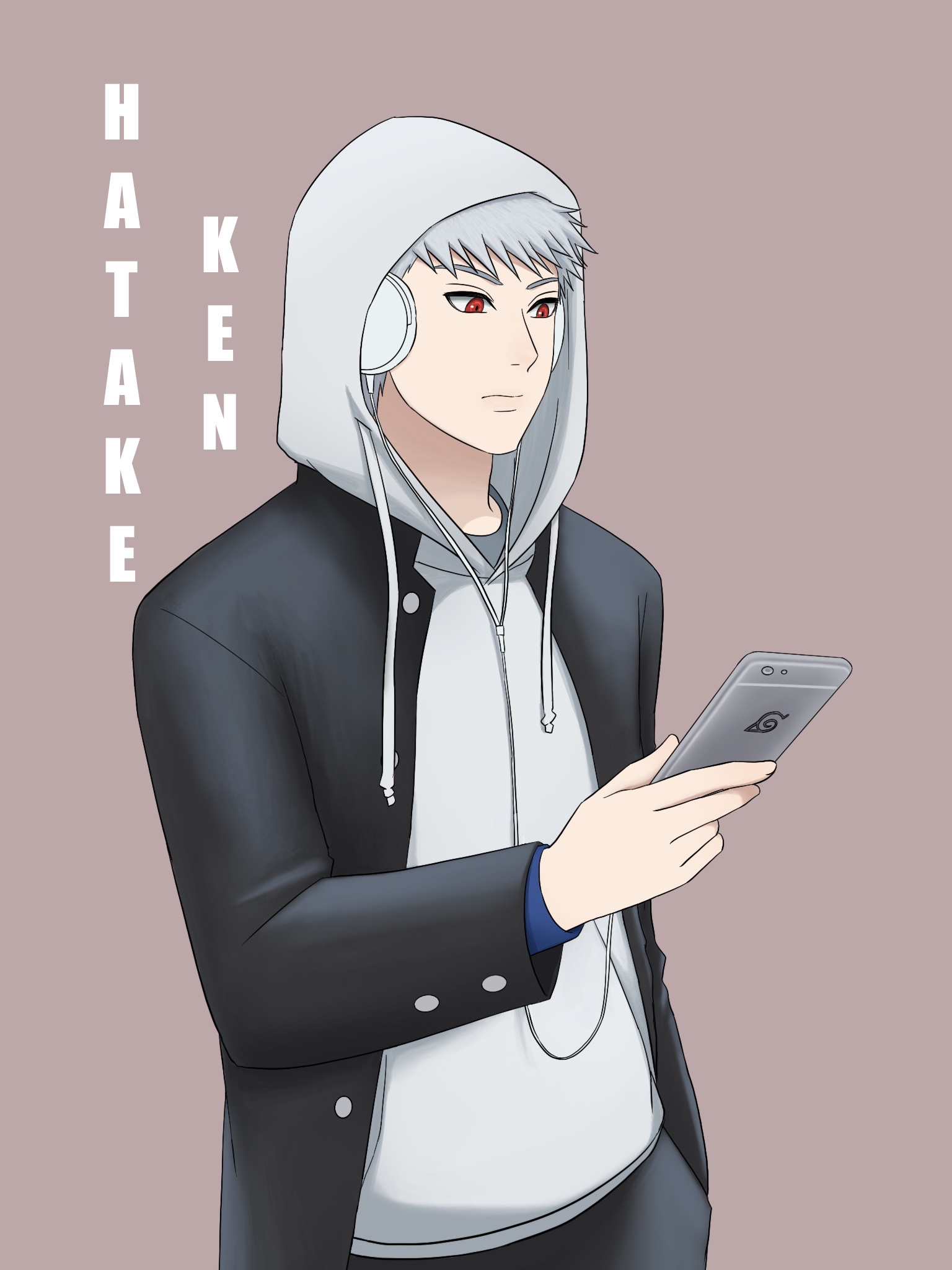 He is a heavy metal fan.

In an alternative universe where ninjas don’t exist, they live a normal high school life.

In this universe, Ken is a playboy. He’s known as the hot handsome boy in school. Not only is he smart but he’s also pretty good at sports.
Unfortunately, Ken’s really lazy. There were many clubs in his high school that needed him and asked him to join the team but since he’s lazy and doesn’t like to stand out, he refuses to join them. He just plays with his friends for fun and ignores any school activities. He has many friends and many girls have been crushing on him but Ken secretly was in love with his best friend Mibuna. When Ken found out that Tsukune liked her too, he decided to step back and give his friend the chance to confess his feelings to her. He cares more about the feelings of his friends.

Mirai has been secretly in love with Ken for a long time. She is the daughter of his father’s best friend; Asuma and Kurenai. They have known each other since childhood and Ken always loved her like a little sister.
She is a dedicated girl, who always gets high exam scores because she’s smart. She often asked Ken to tutoring her because she wanted to be close to him.

Later, he and Mirai started dating, which is why Asuma always fights with him. Although Asuma likes Ken, he is very protective of his daughter. 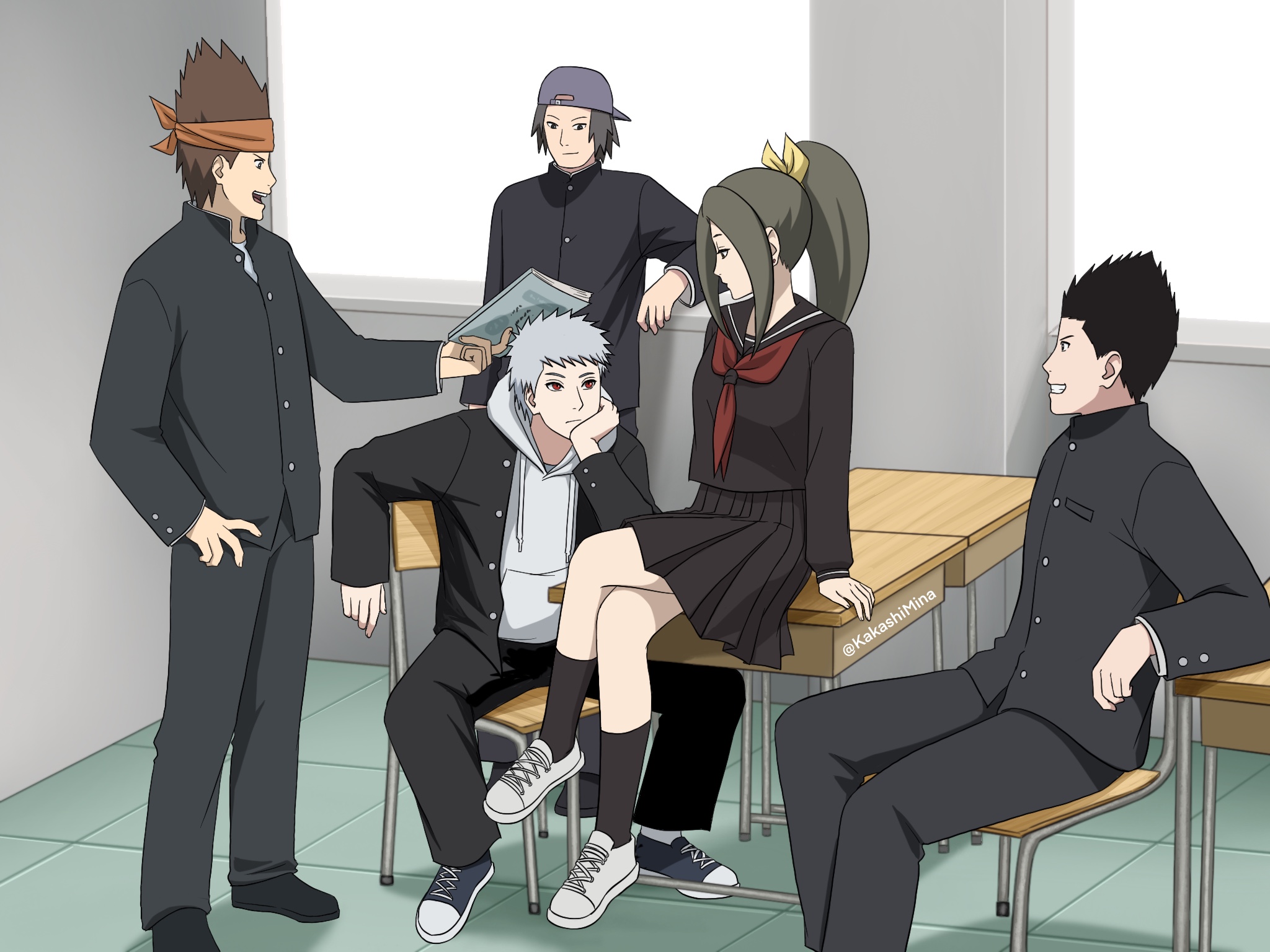 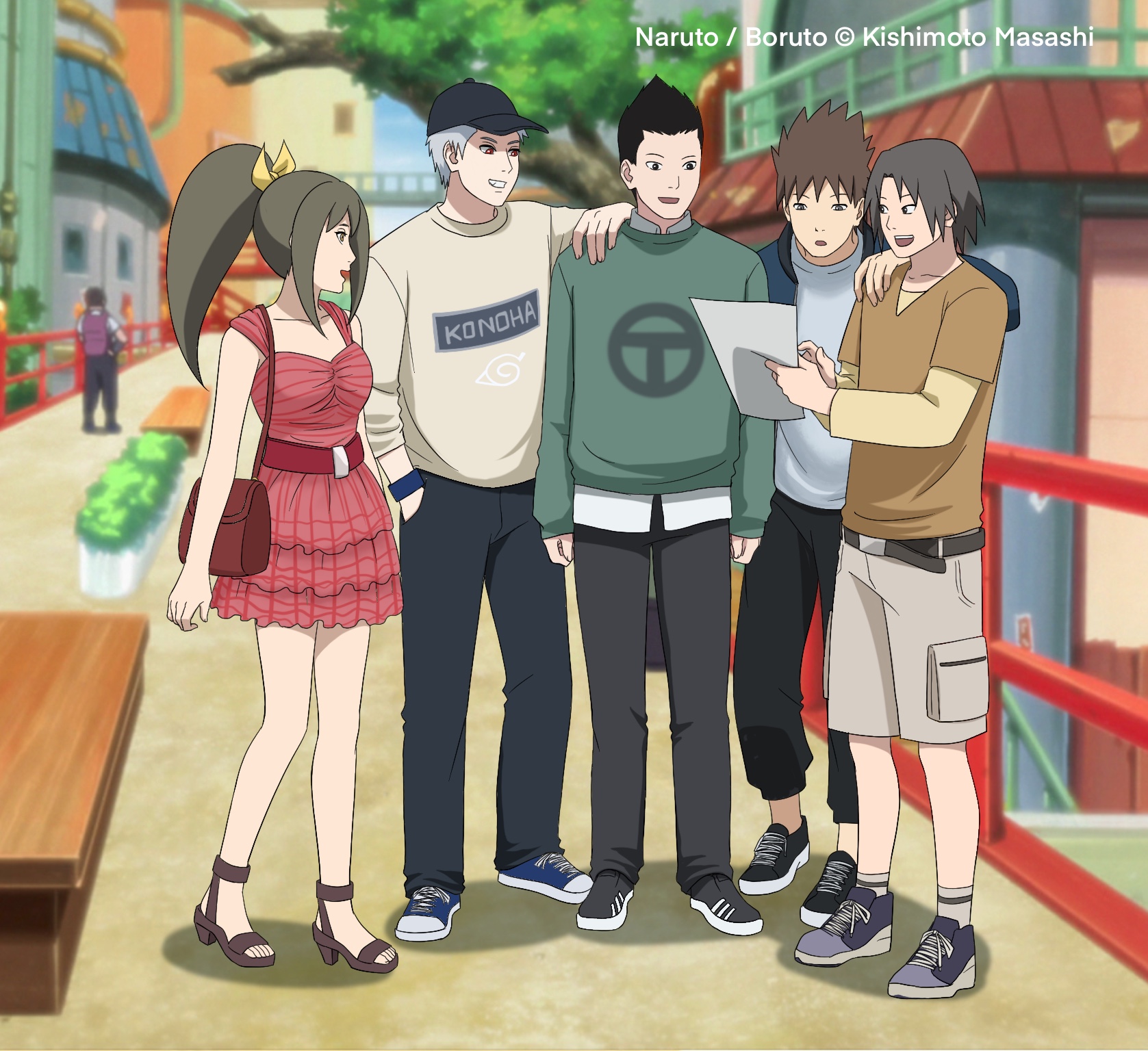 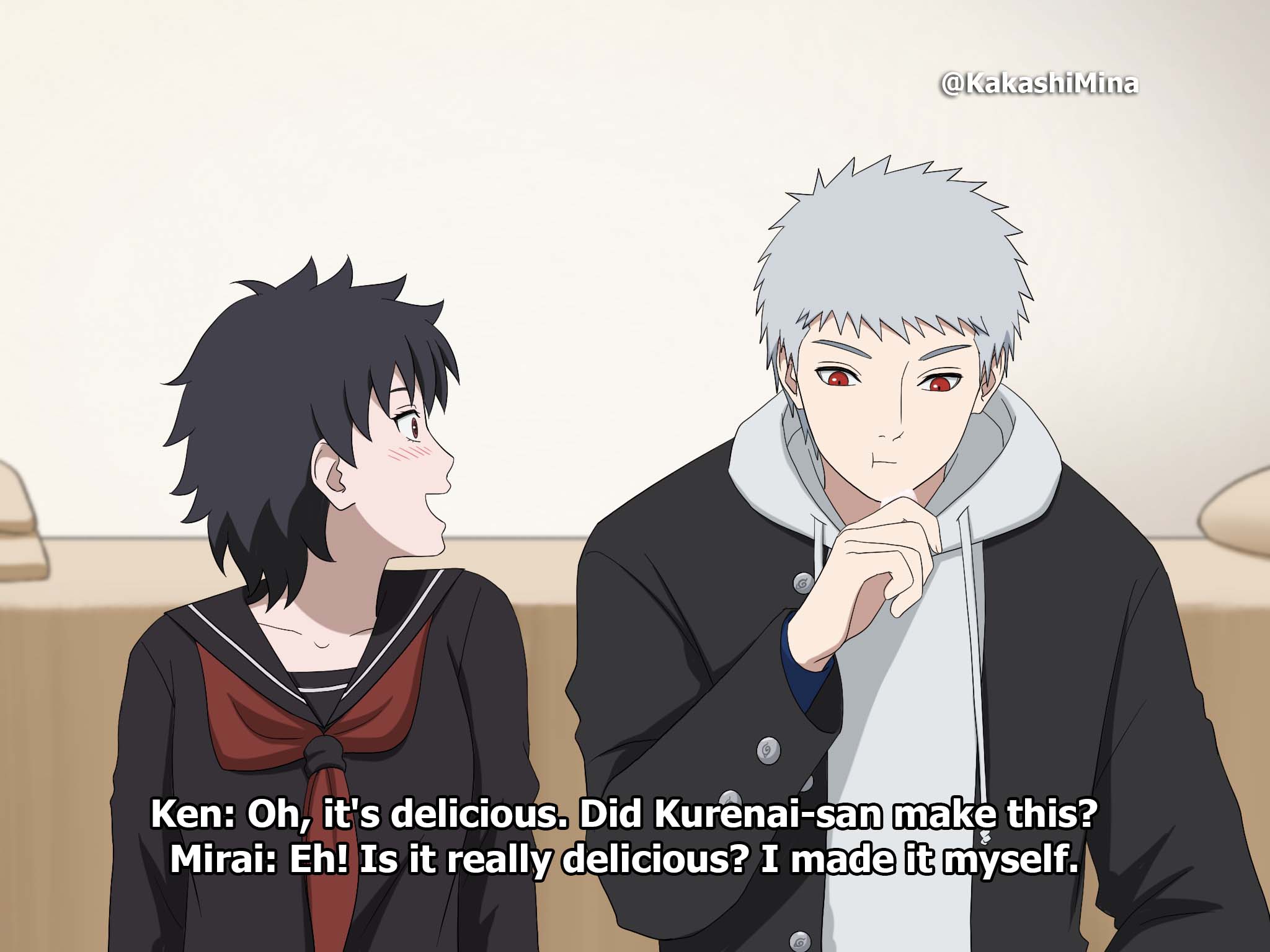 Mirai: Eh! Is it really delicious? I made it myself. 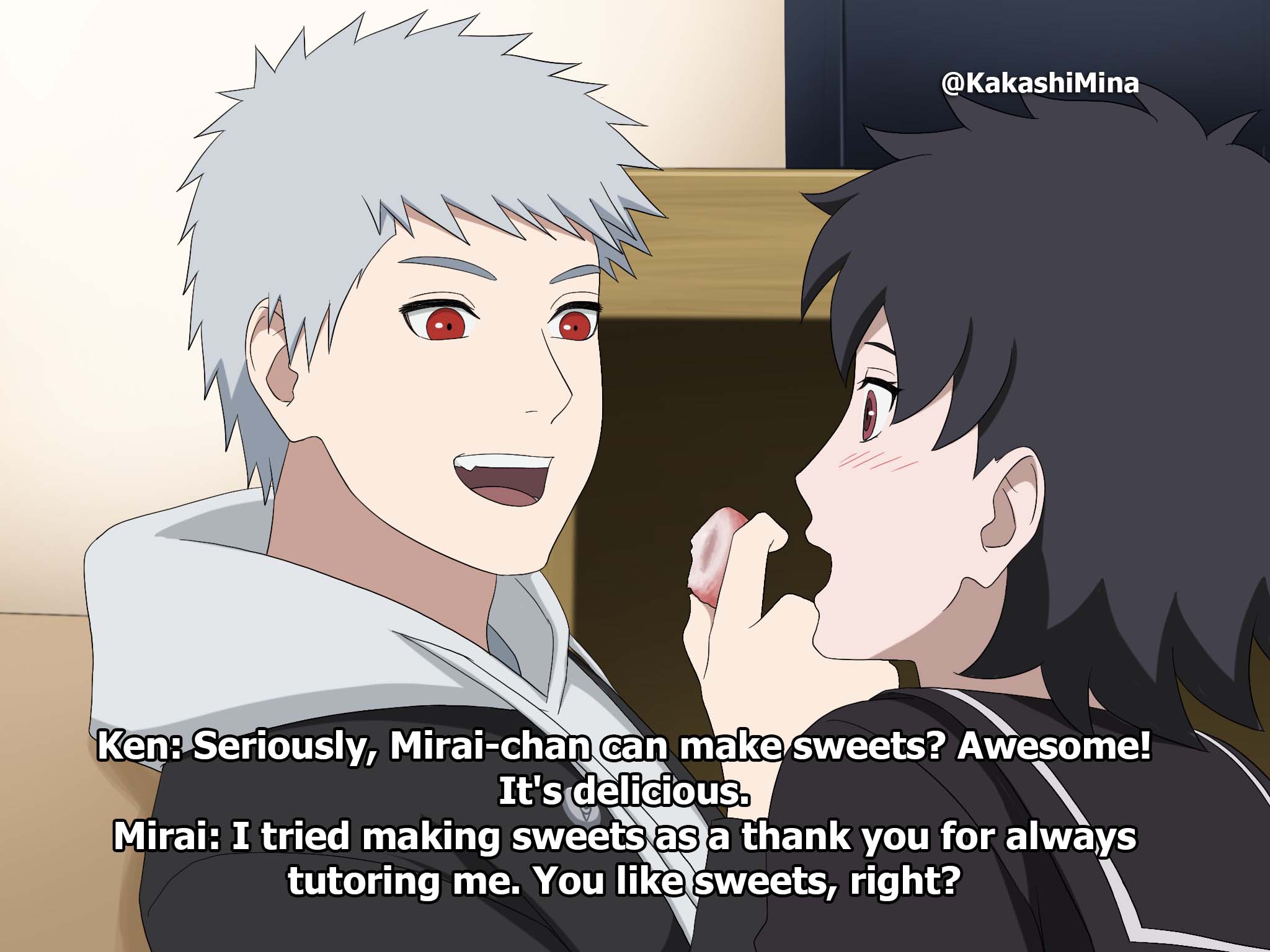 Mirai: I tried making sweets as a thank you for always tutoring me. You like sweets, right? 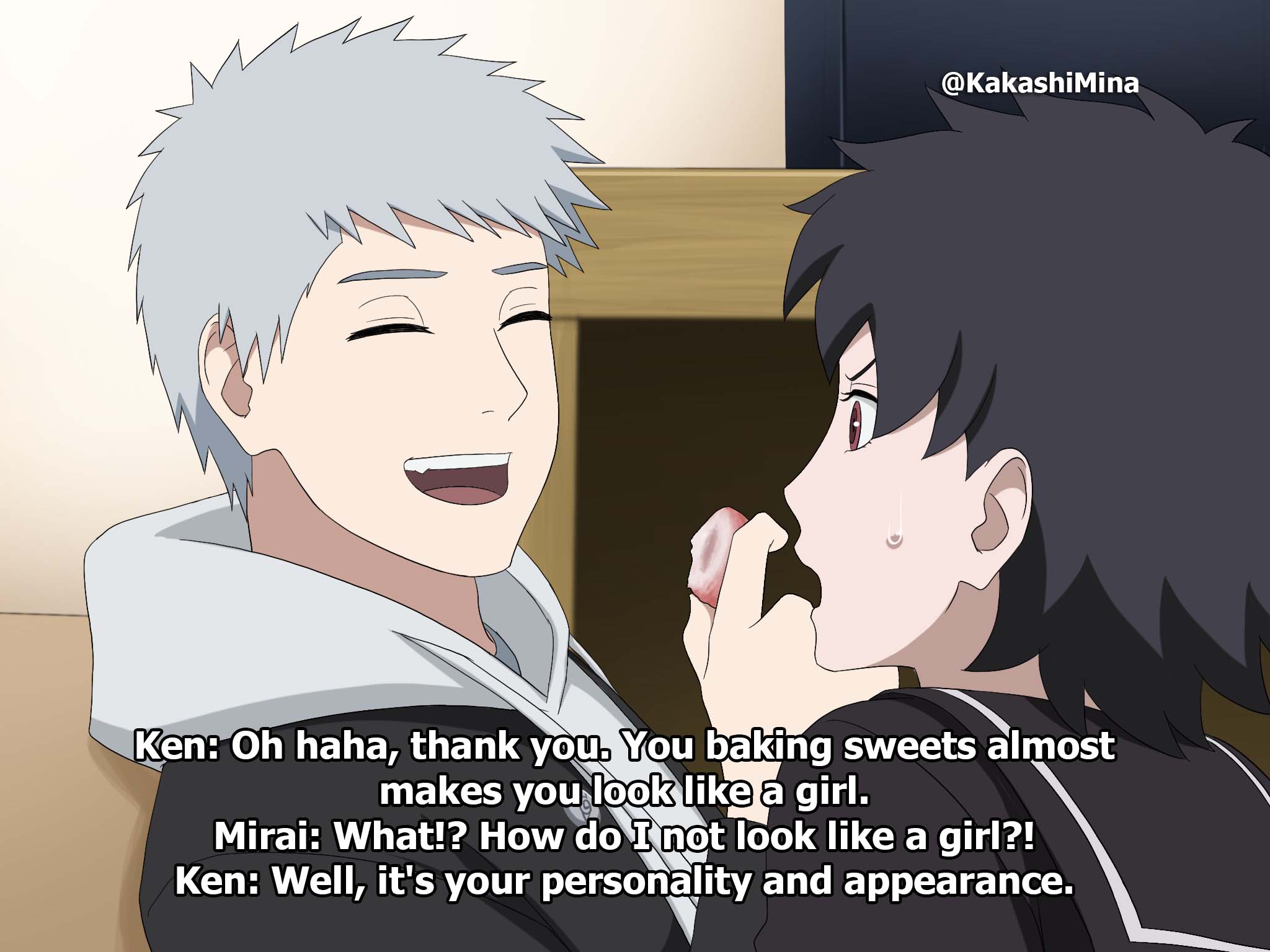 Ken: Oh haha, thank you. You baking sweets almost makes you look like a girl. 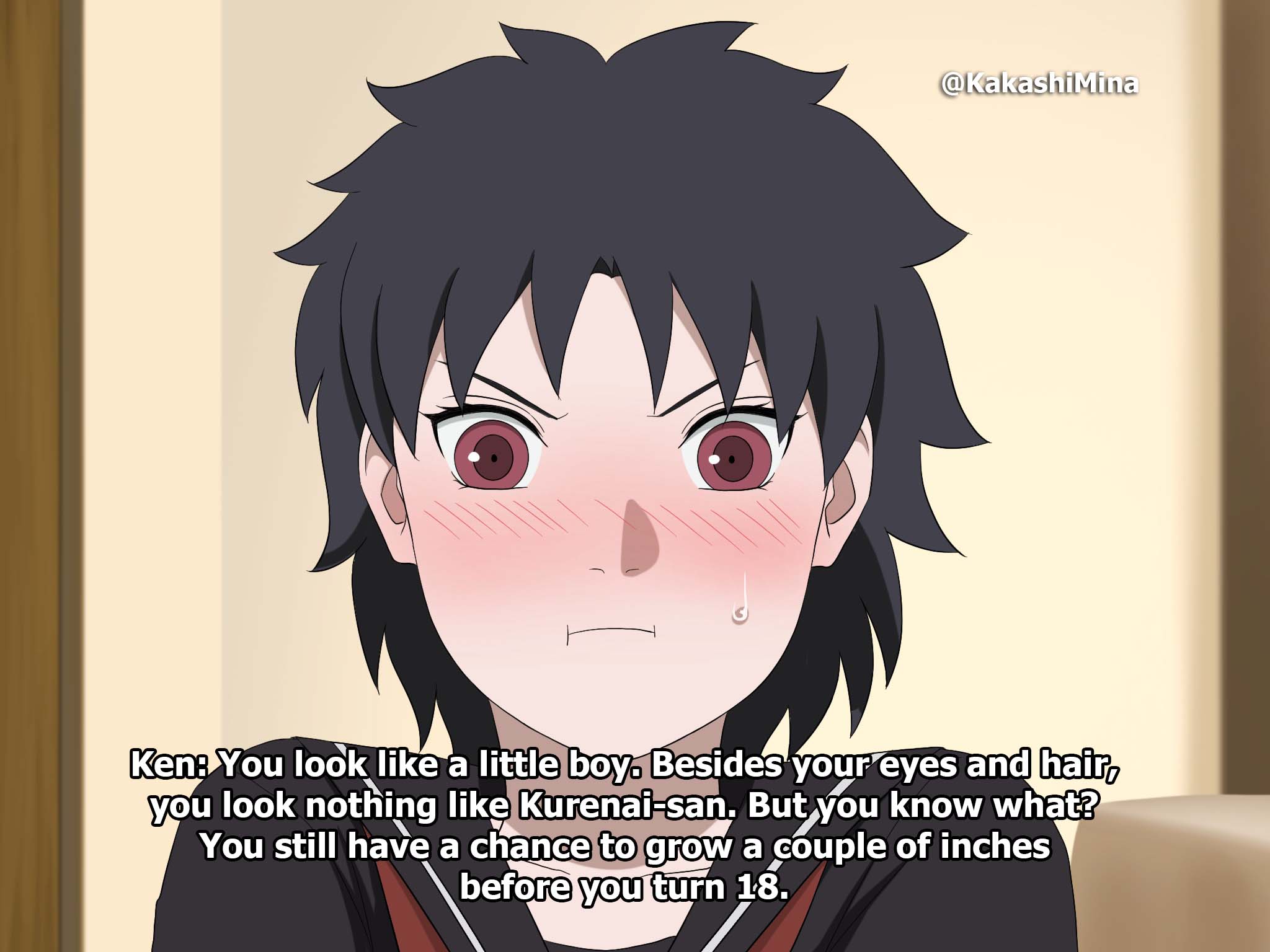 Ken: You look like a little boy. Besides your eyes and hair, you look nothing like Kurenai-san. But you know what? You still have a chance to grow a couple of inches before you turn 18.

[Girls grow up fast between 11-14 years-old and then can grow a little more. They stop growing at the age of 18] 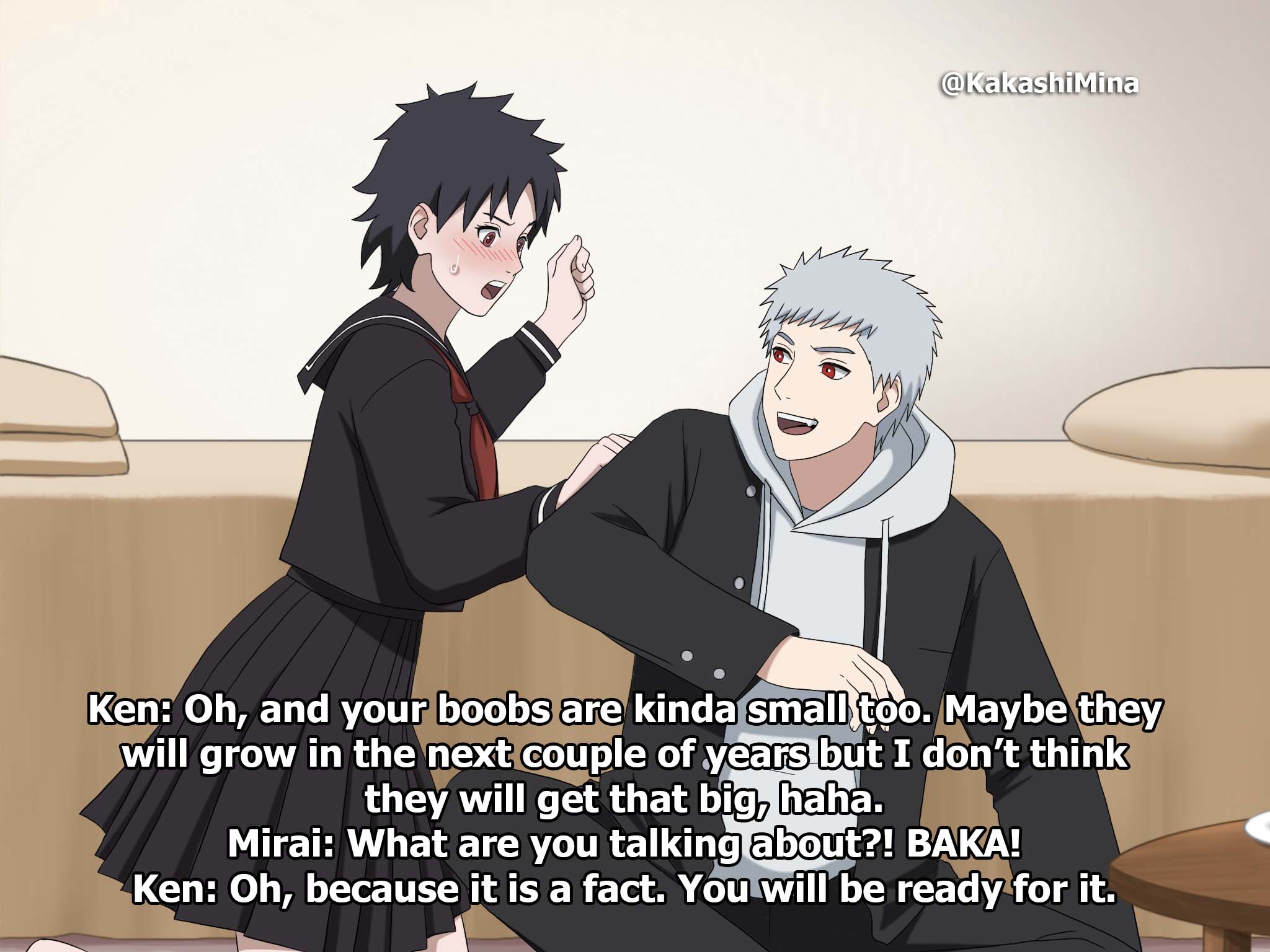 Ken: Oh, and your boobs are kinda small too. Maybe they will grow in the next couple of years but I don’t think they will get that big, haha.

Mirai: What are you talking about?! BAKA!

Ken: Oh, because it is a fact. You will be ready for it. 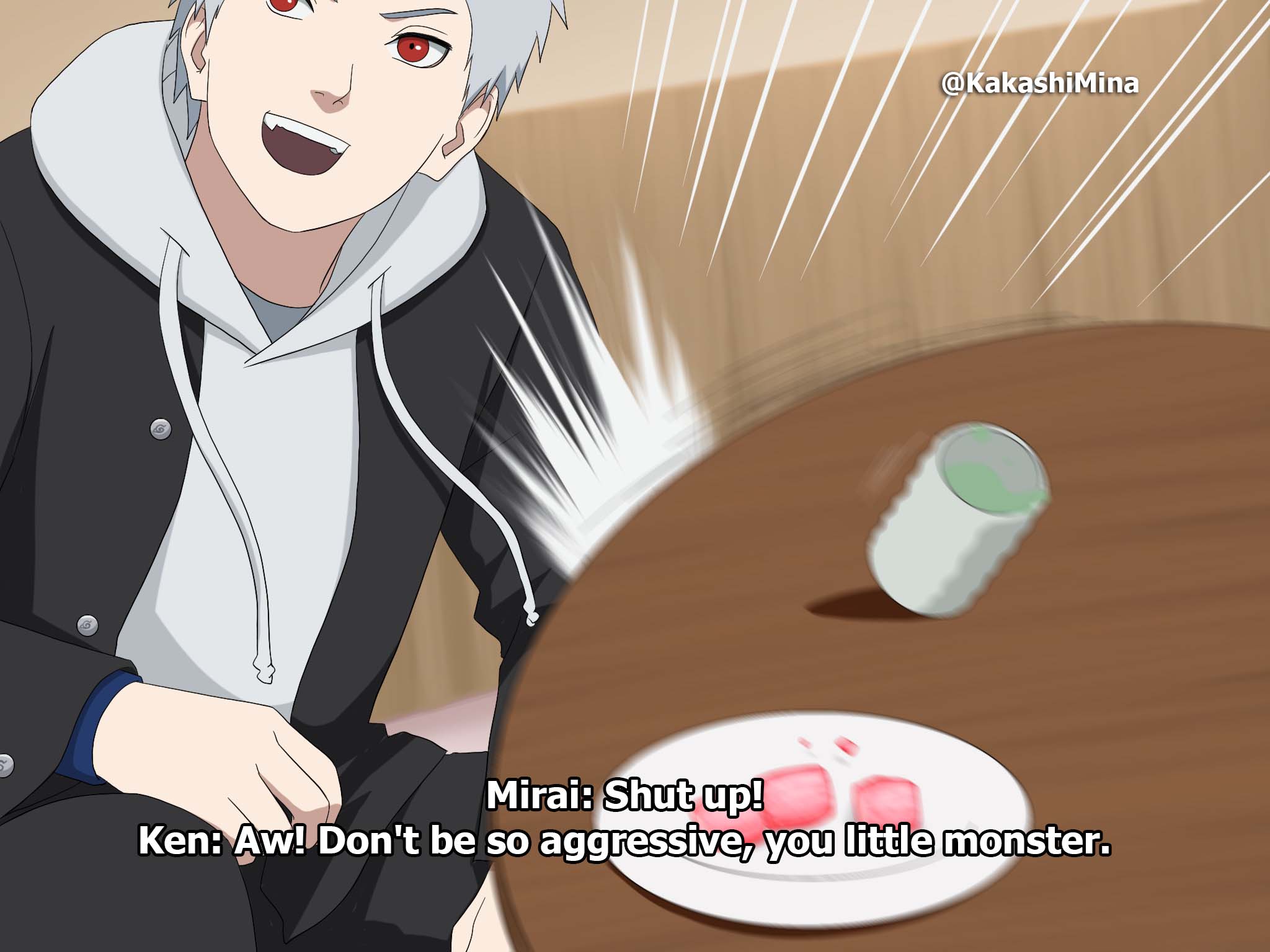 Ken: Aw! Don’t be so aggressive, you little monster. 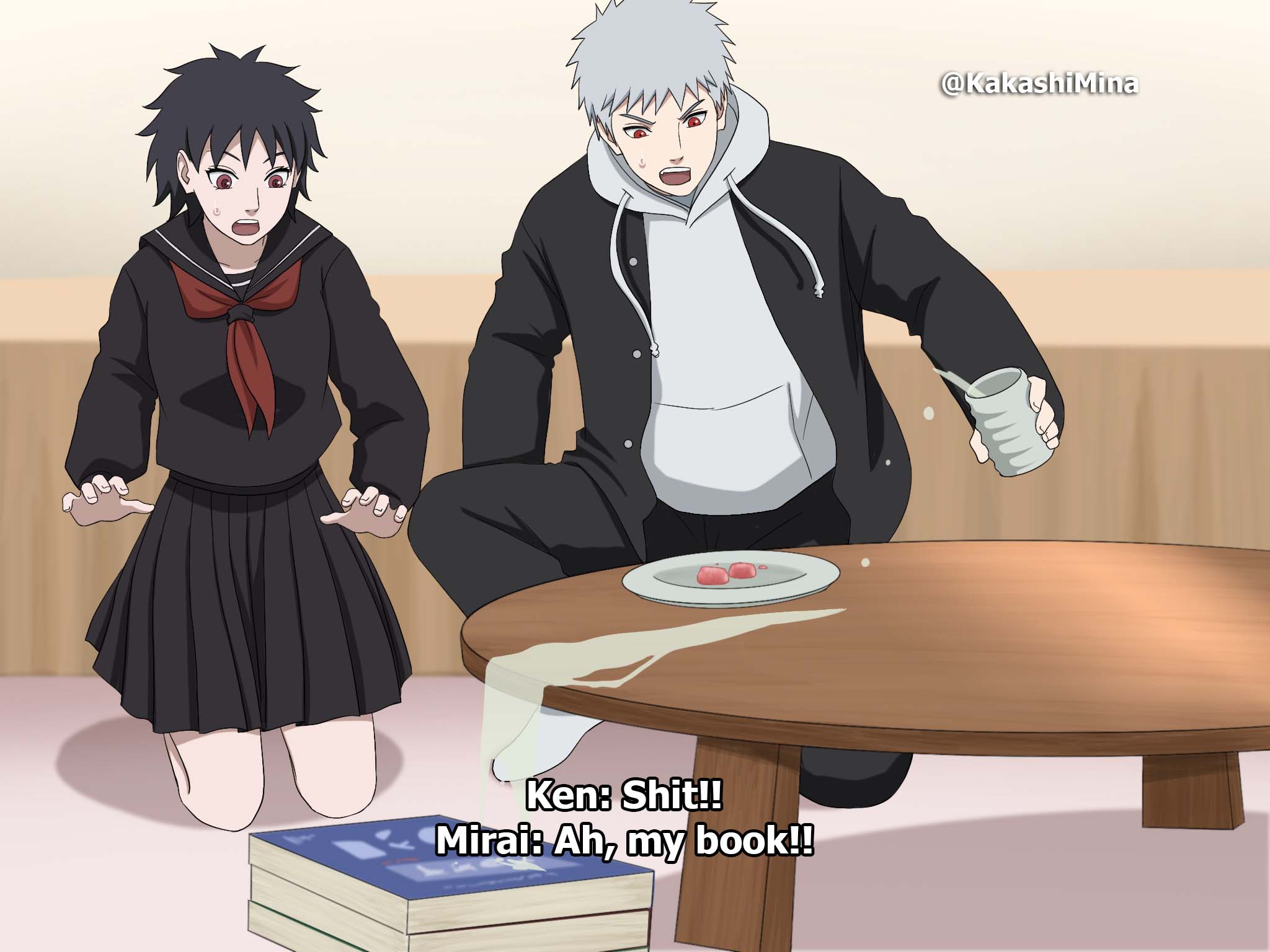 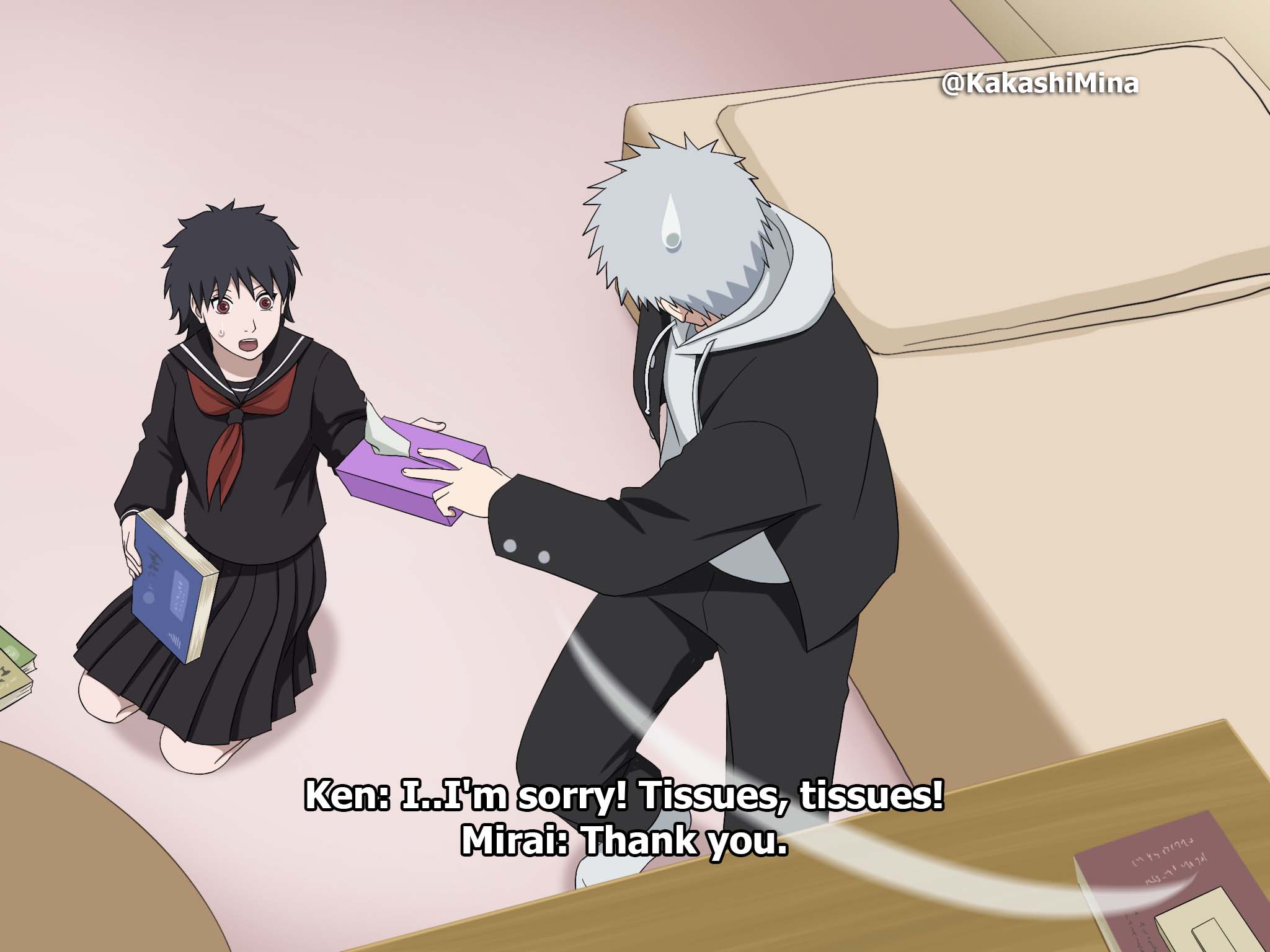 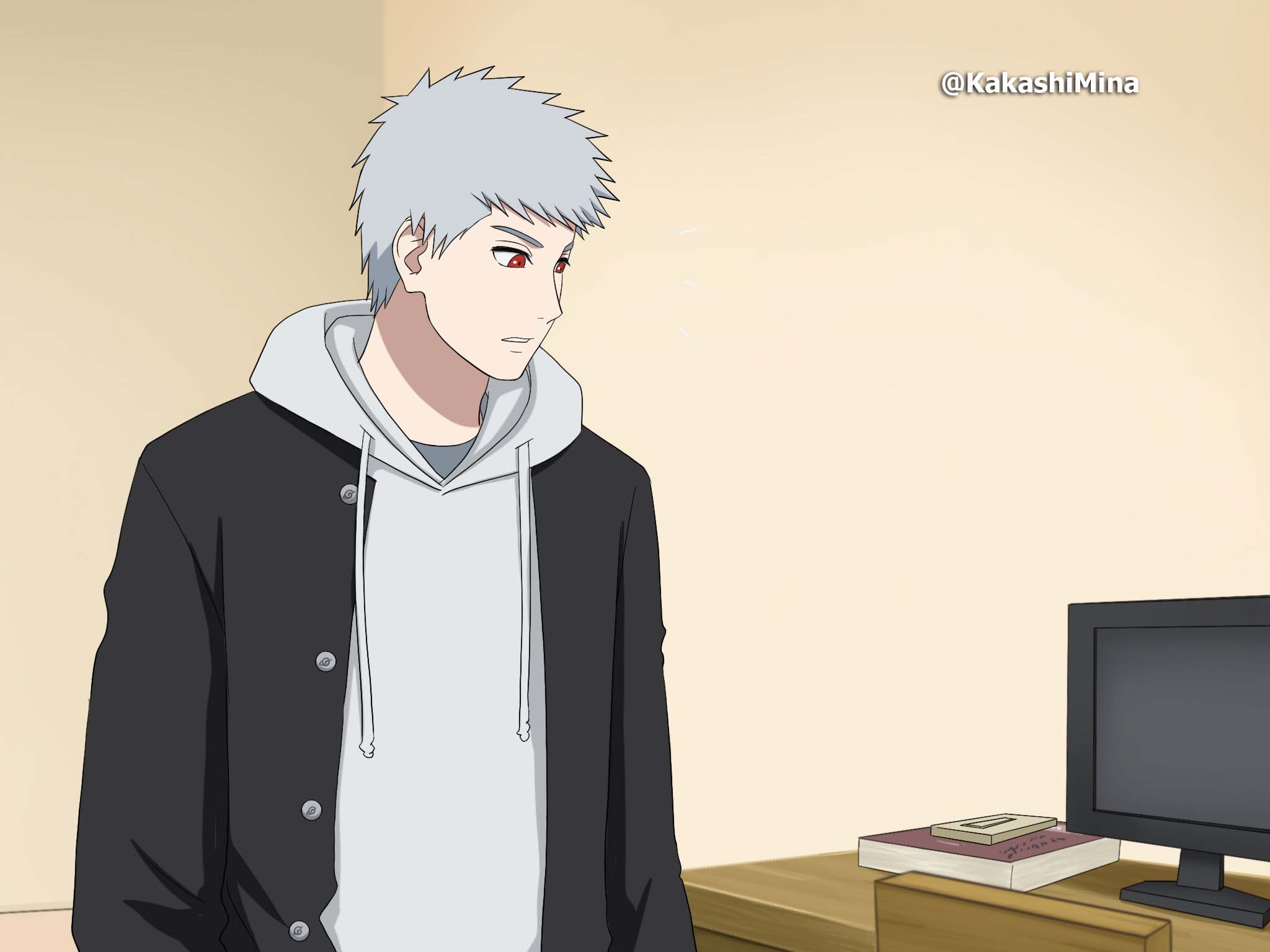 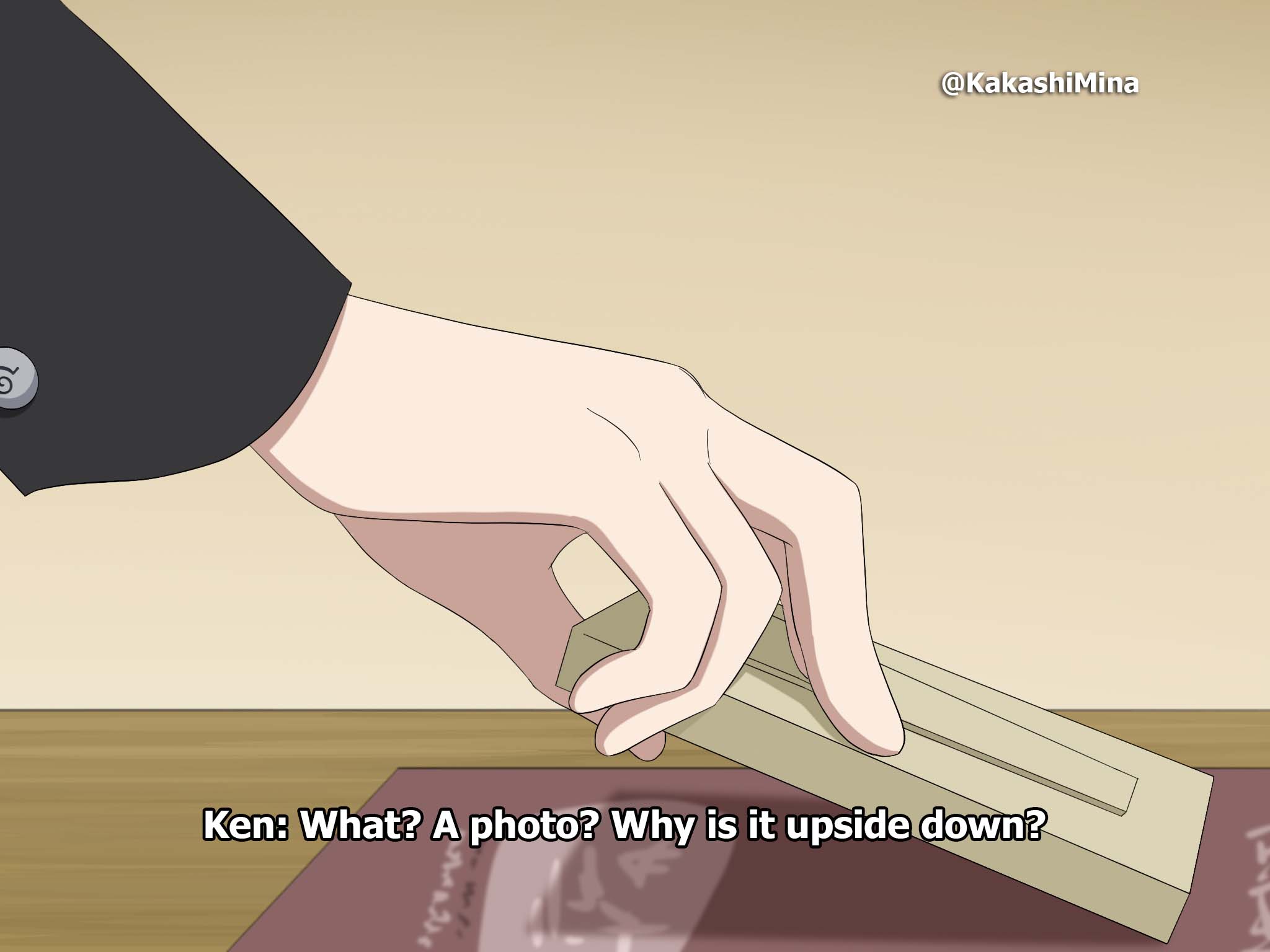 Ken: What? A photo? Why is it upside down? 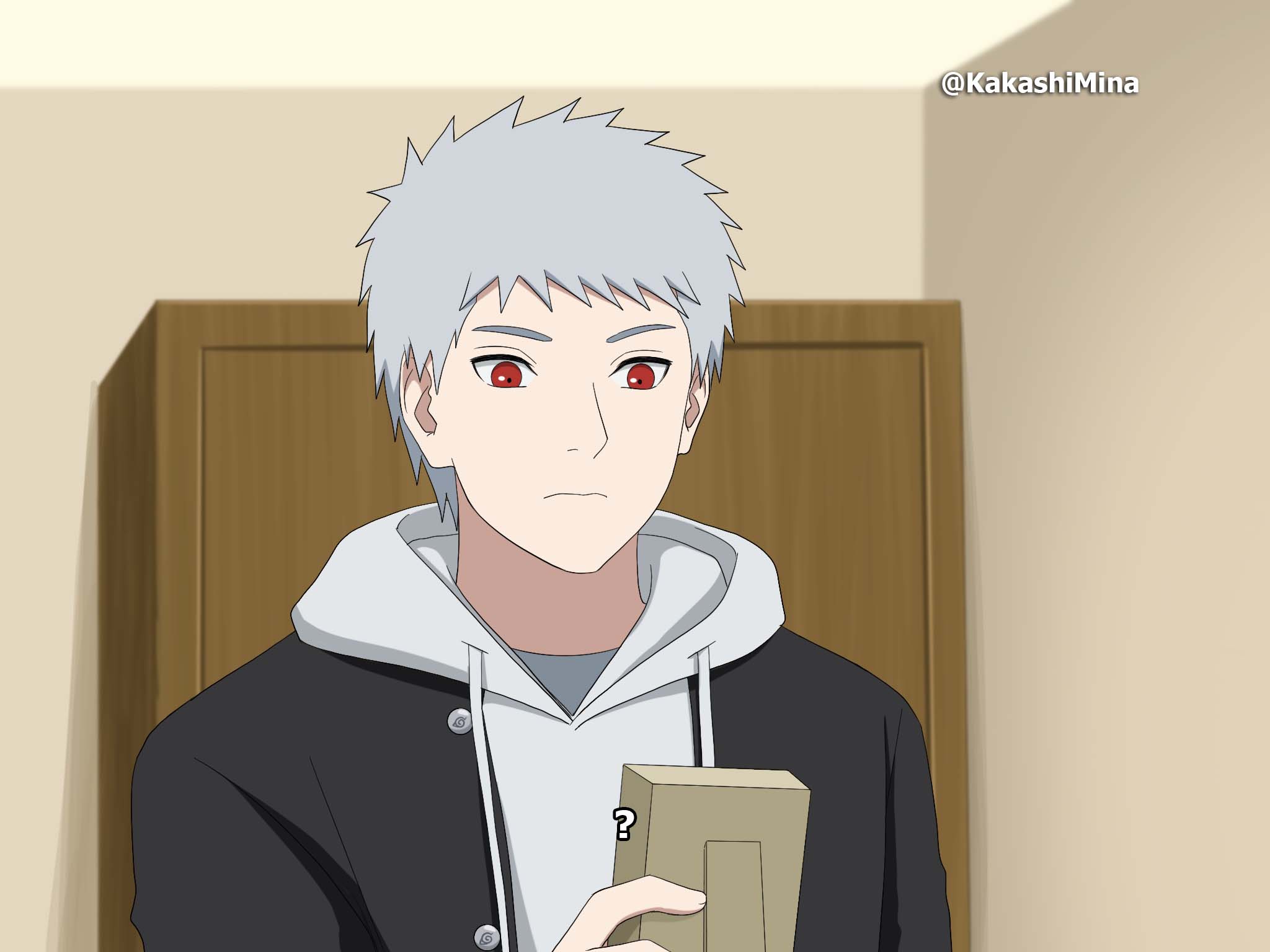 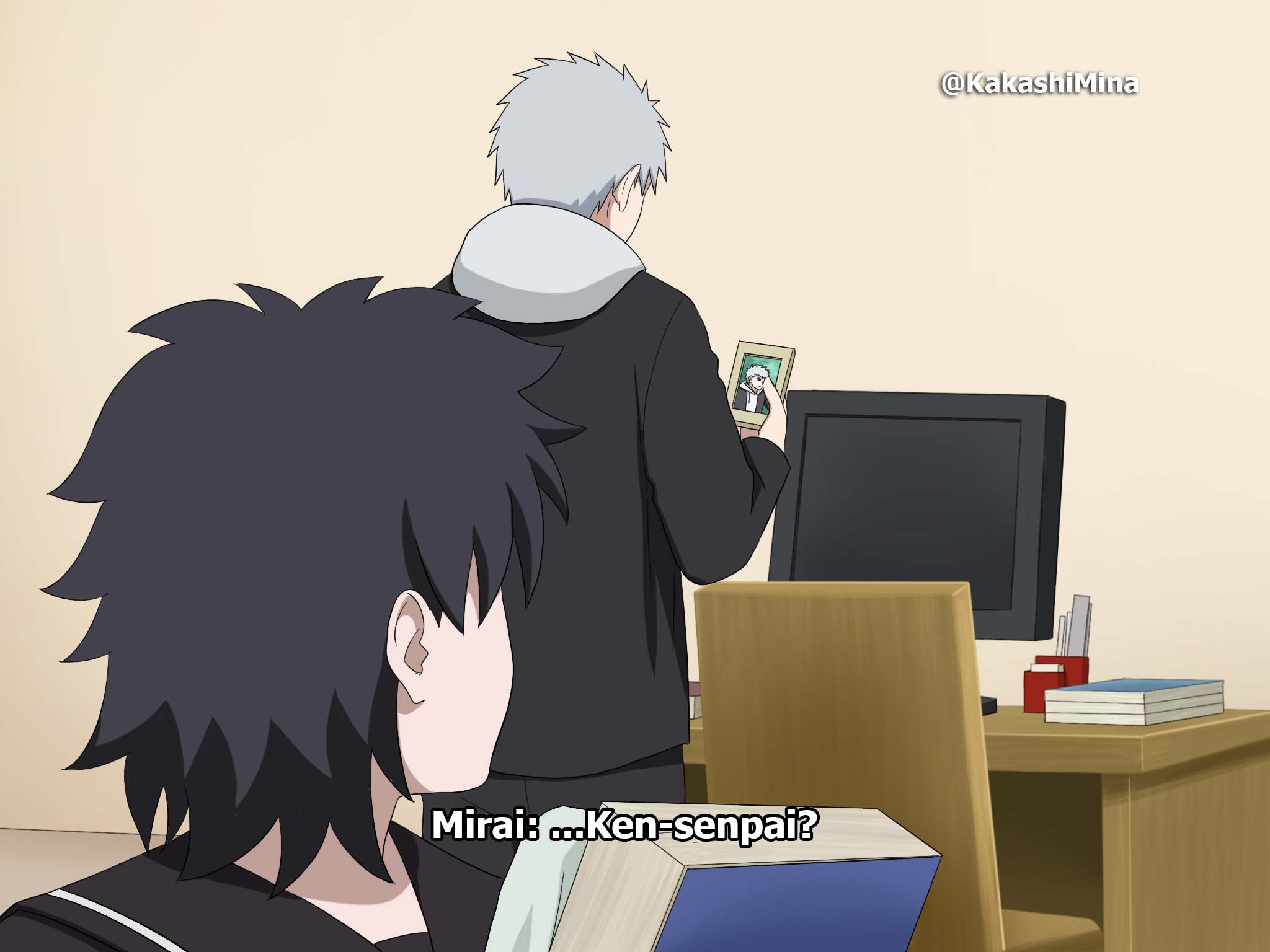 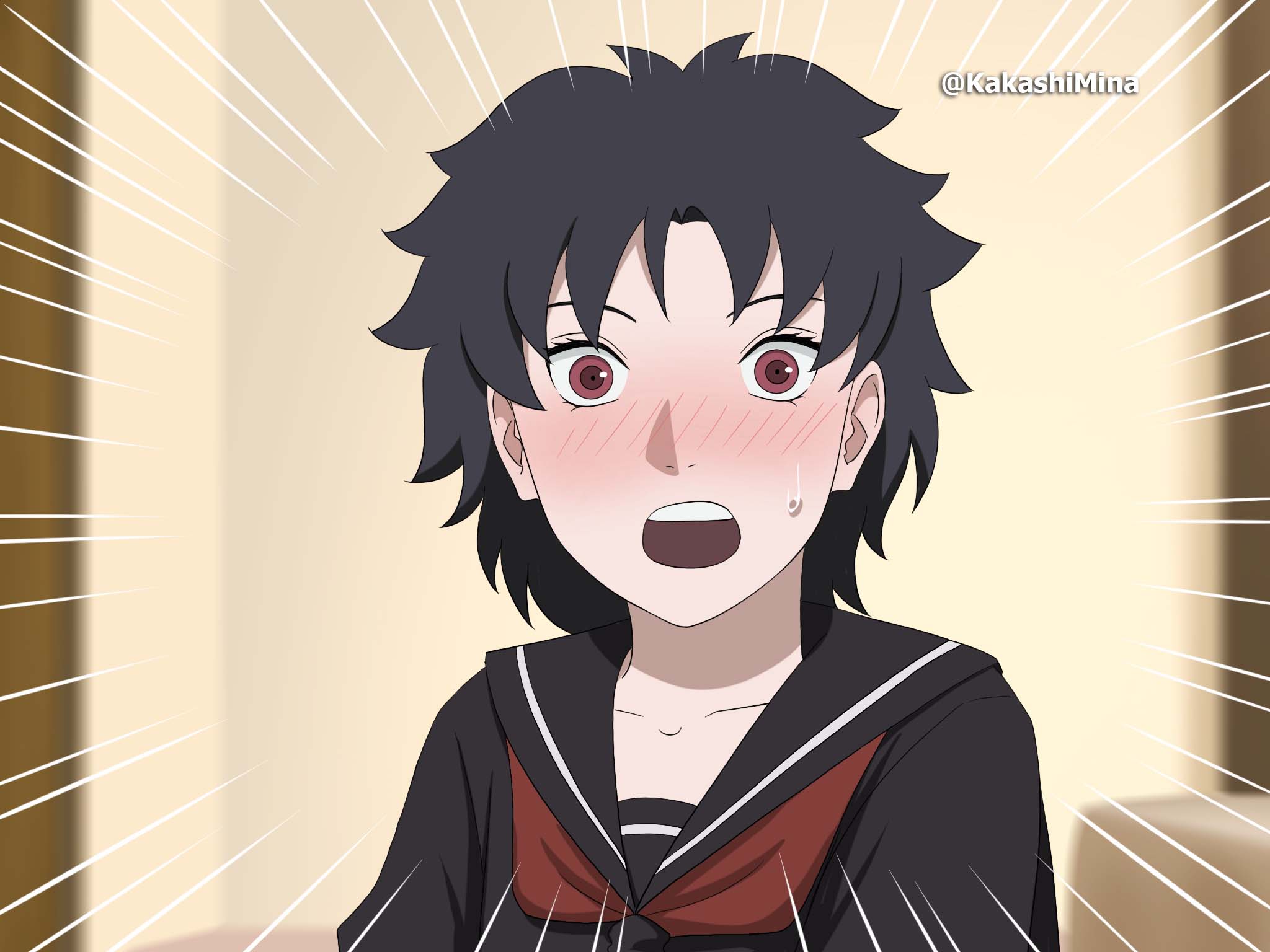 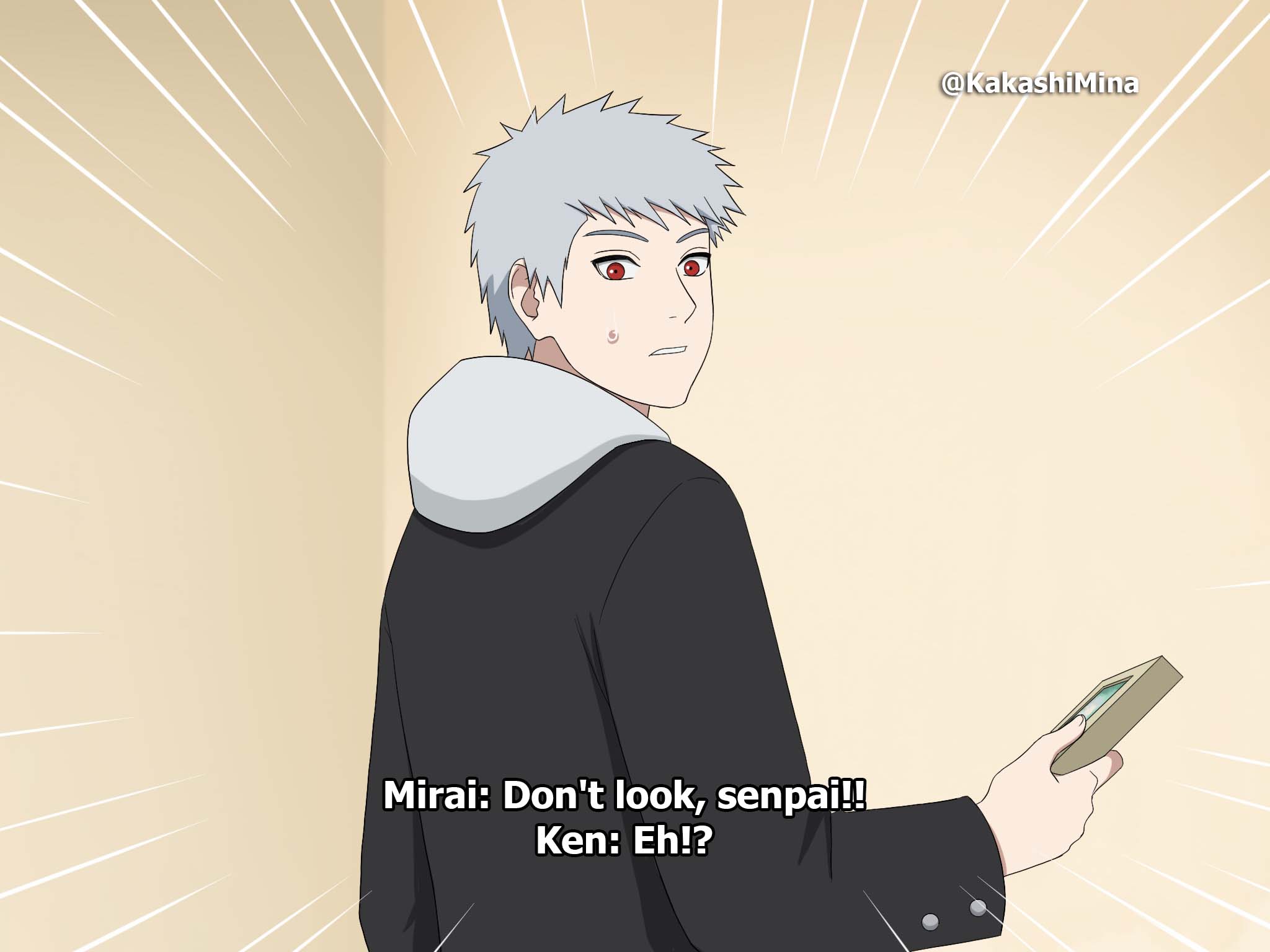 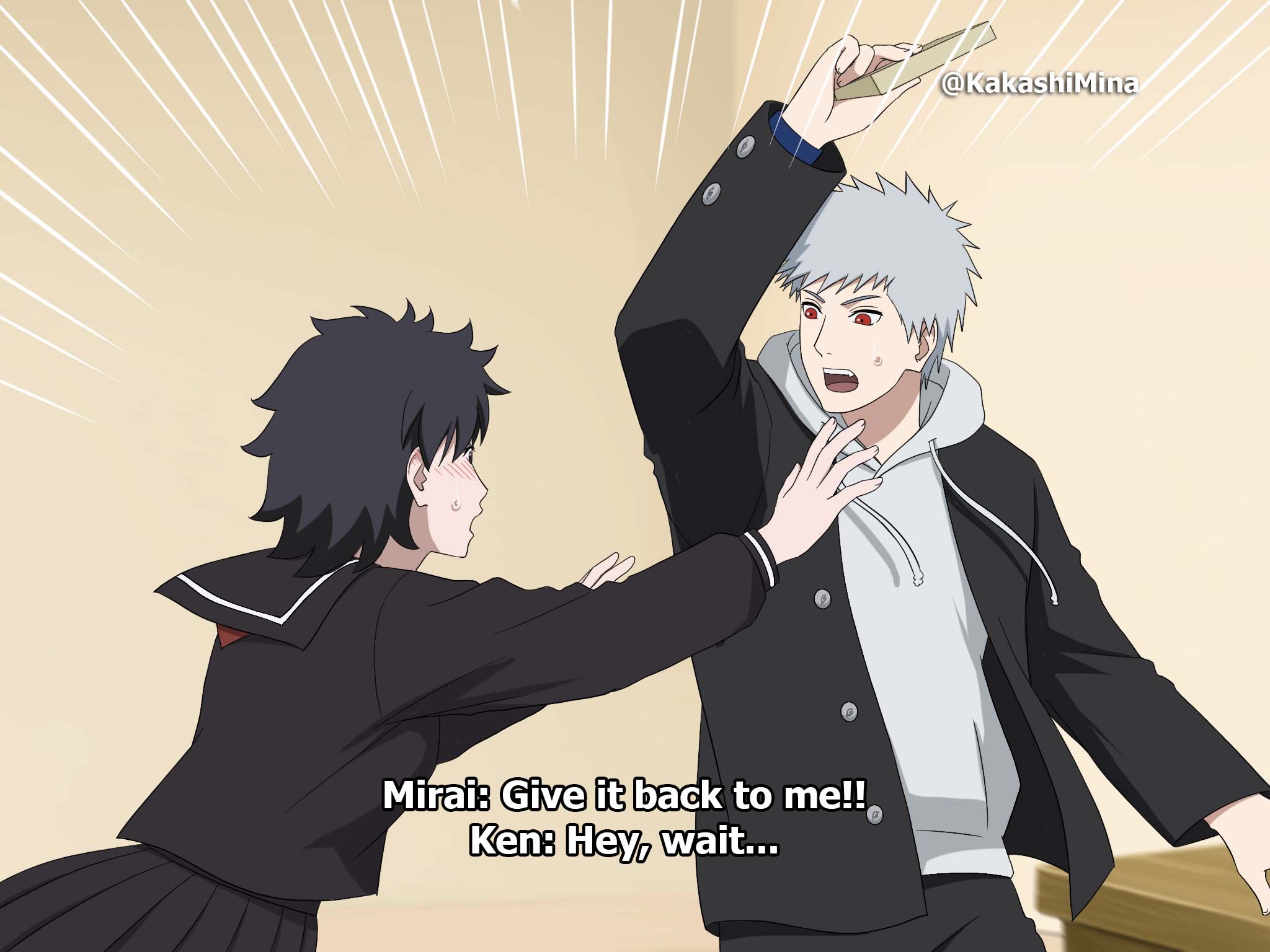 Mirai: Give it back to me!! 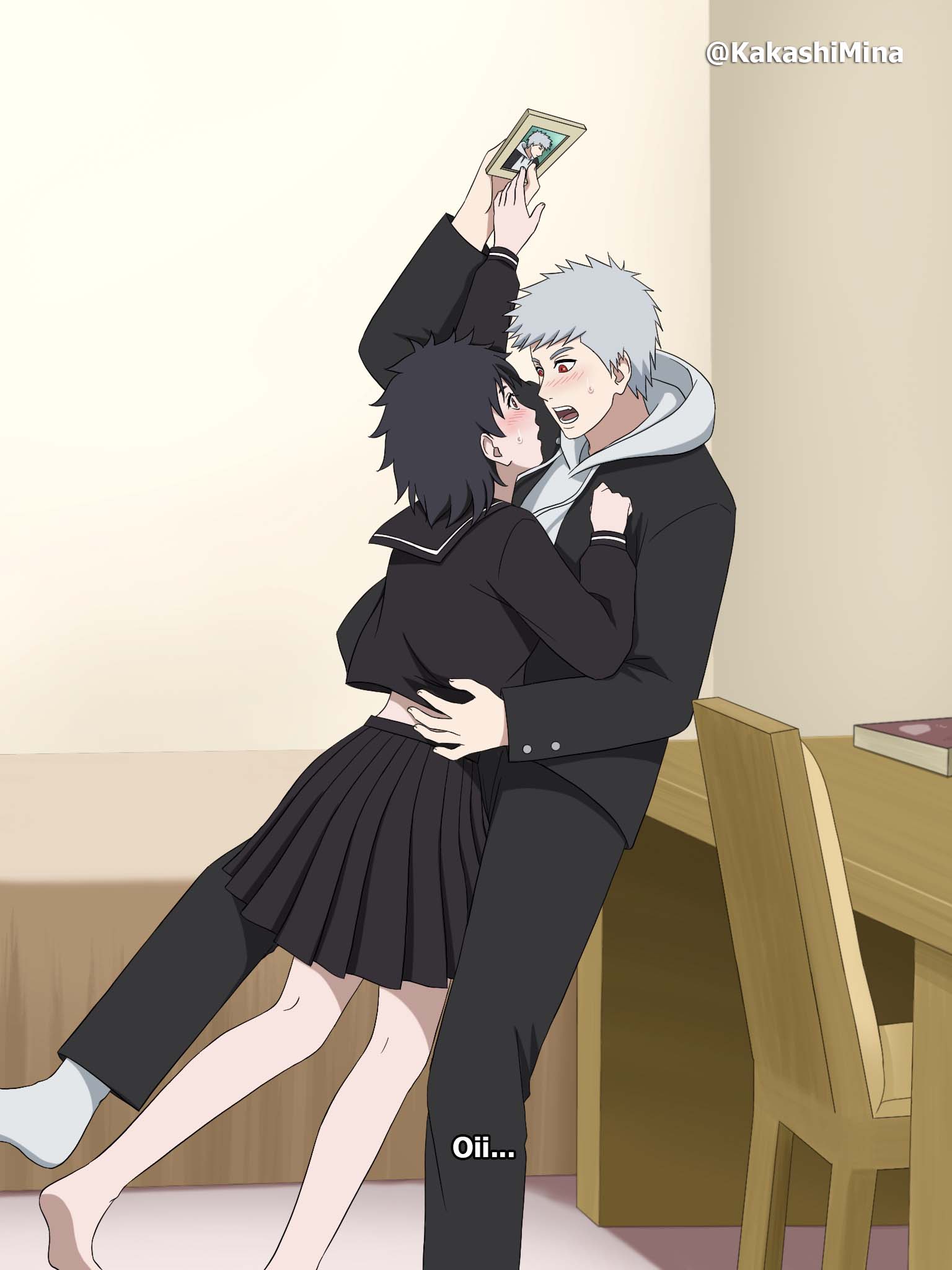 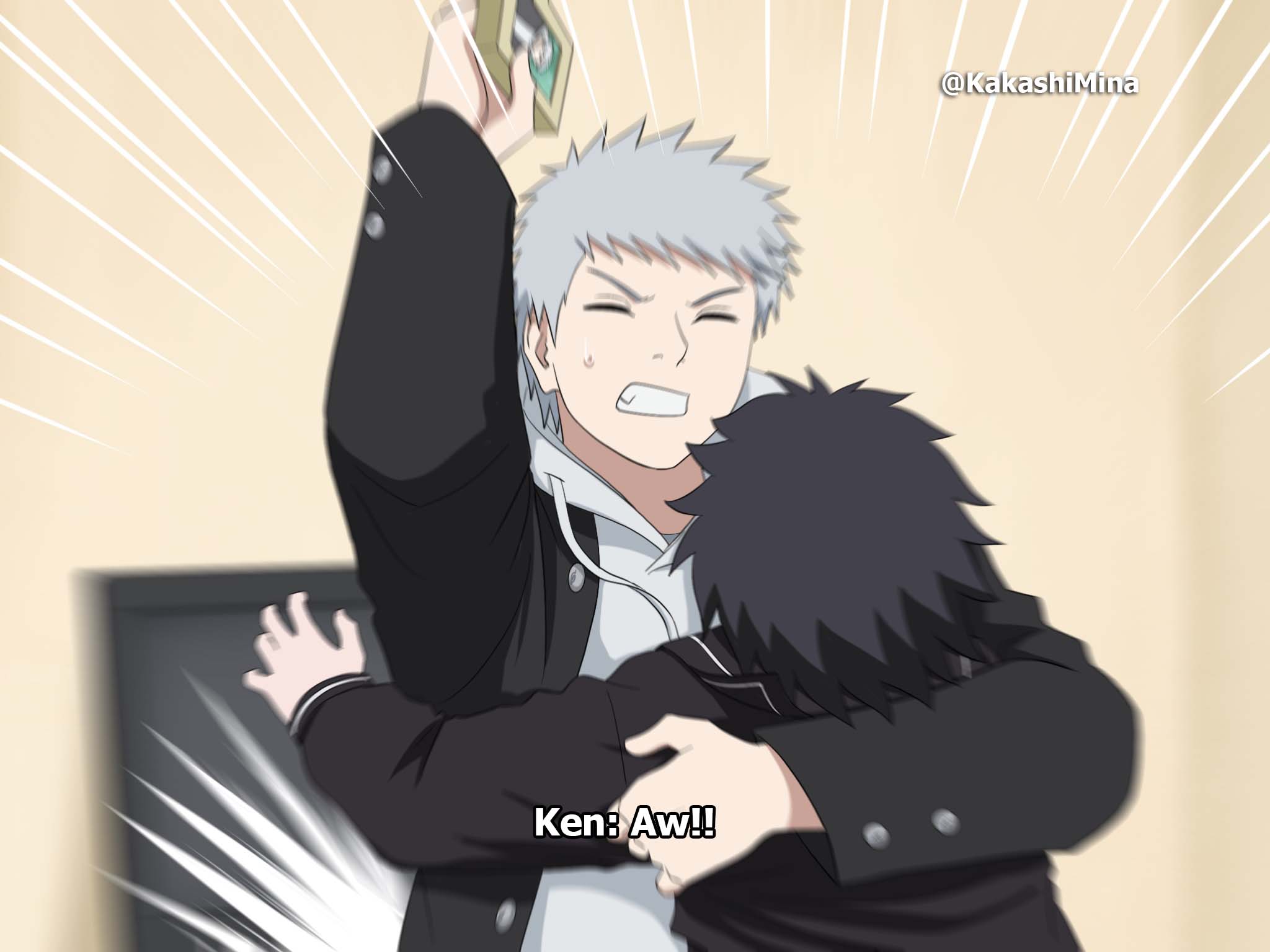 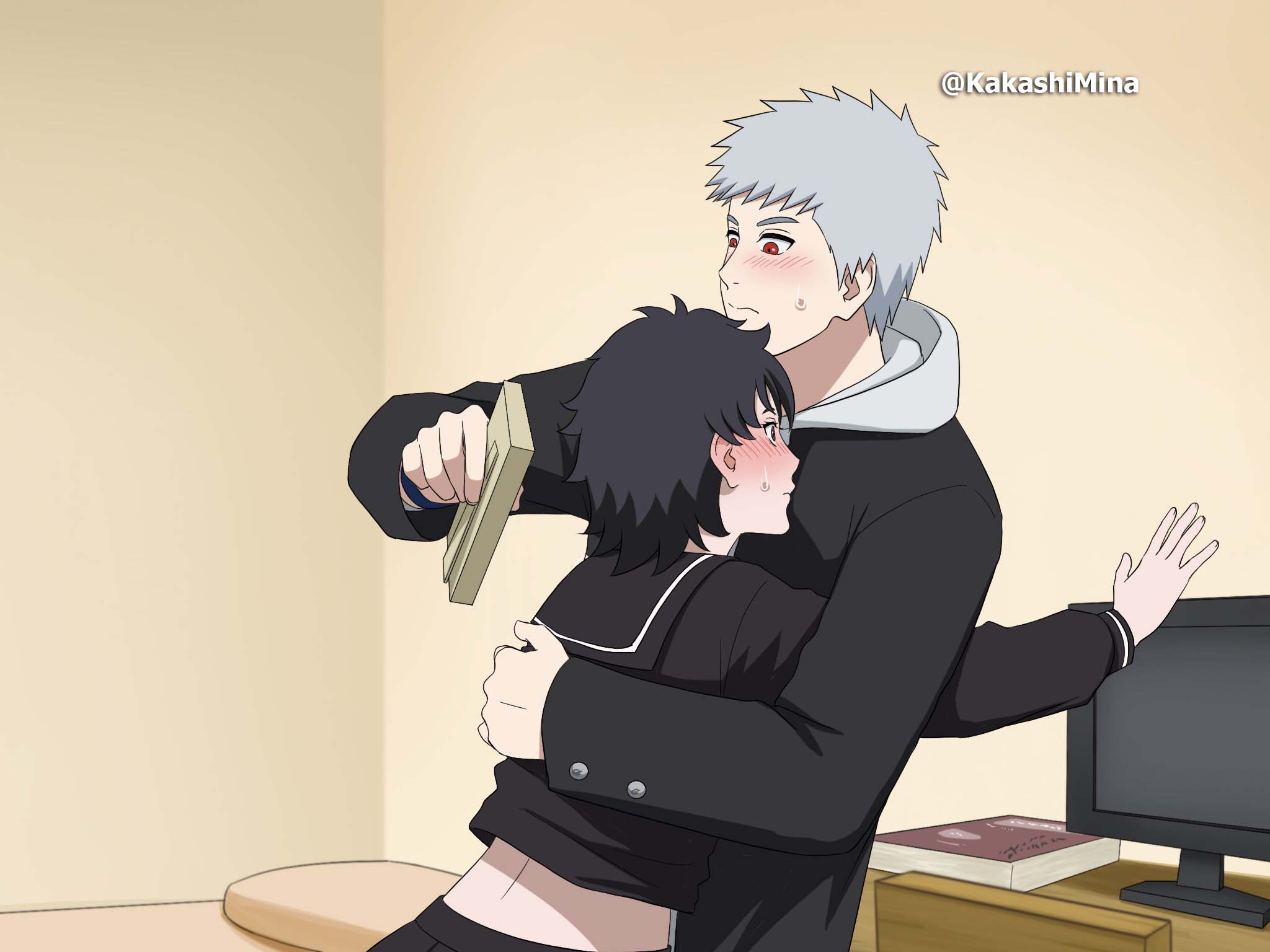 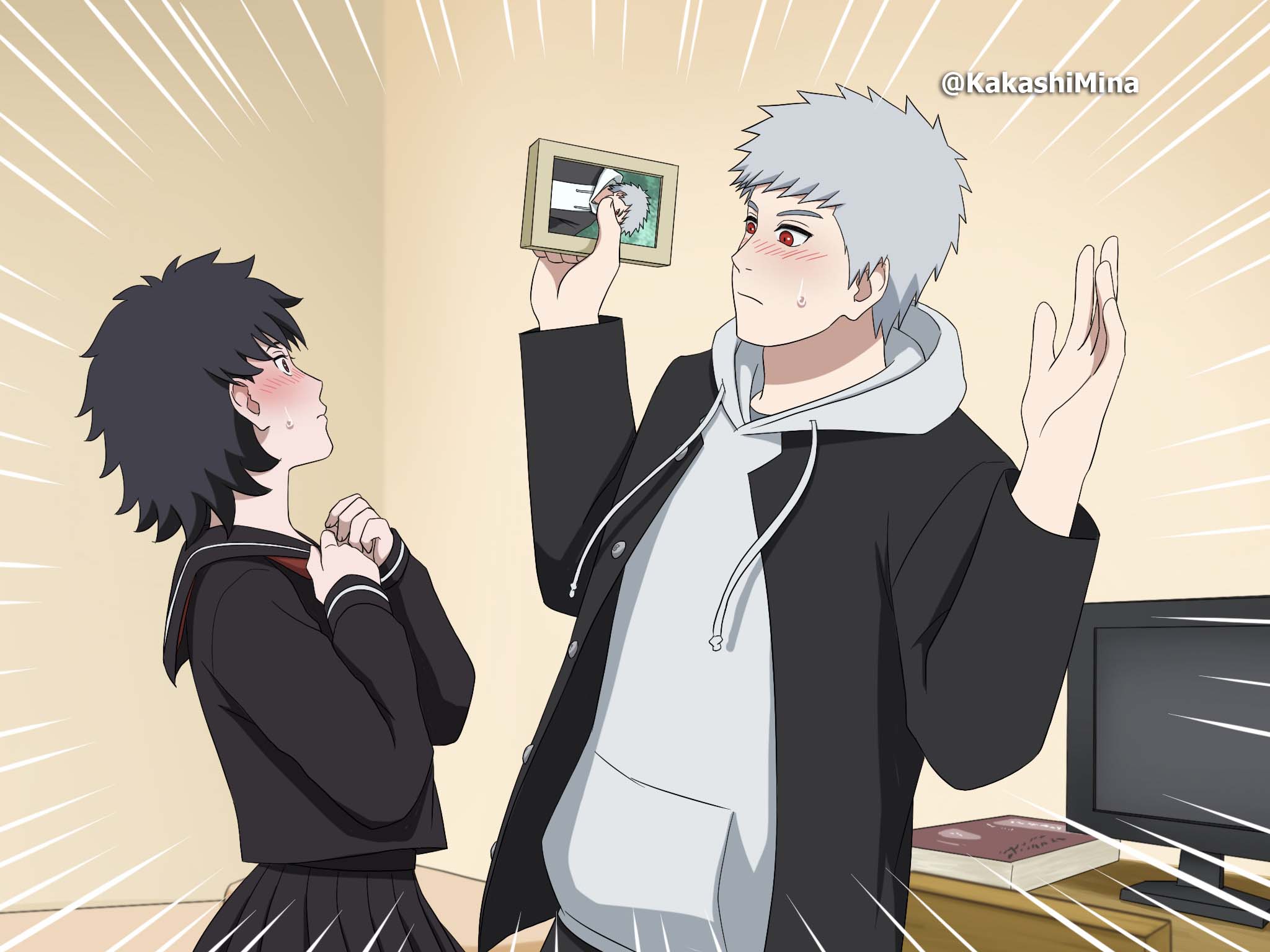 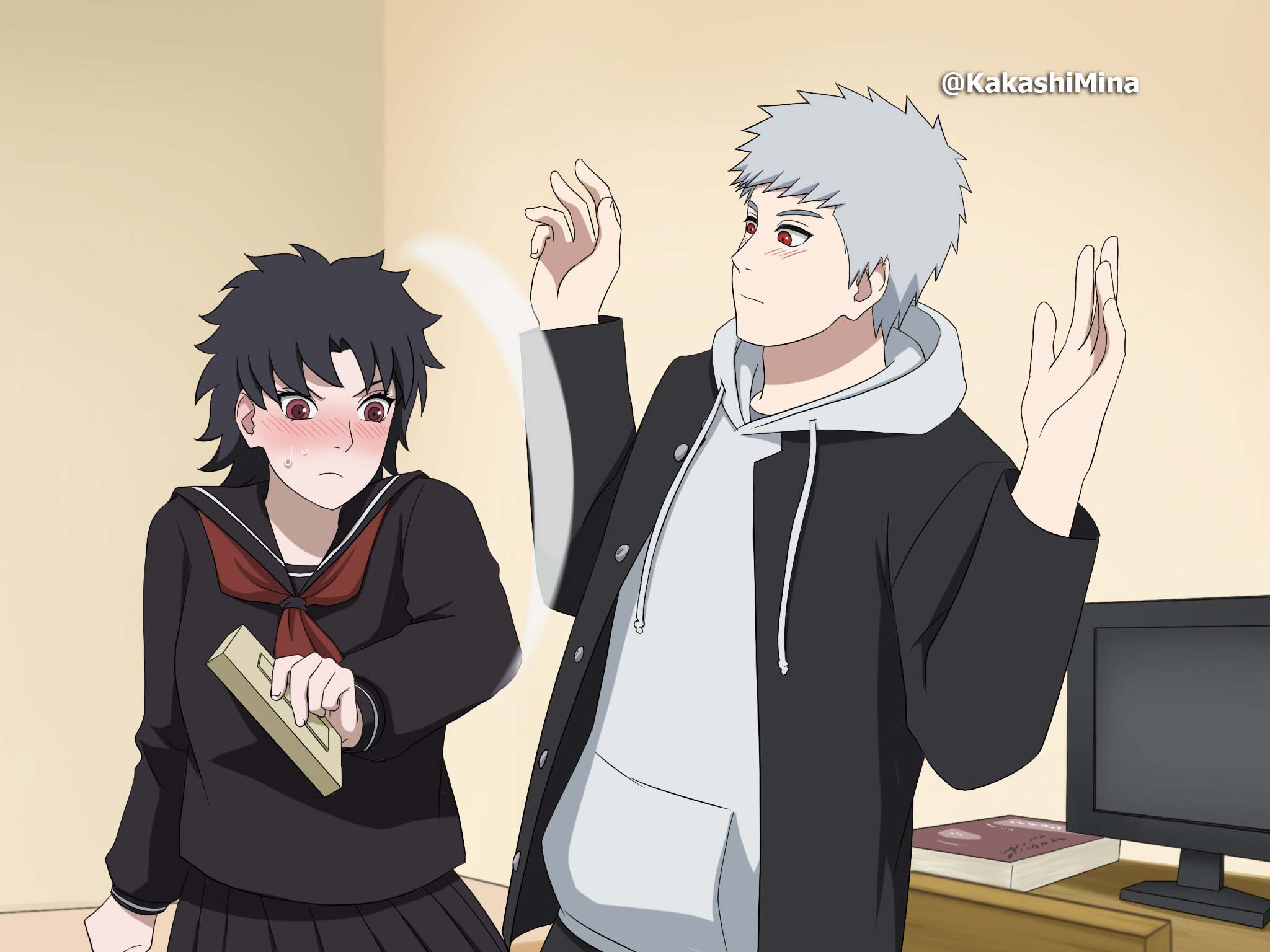 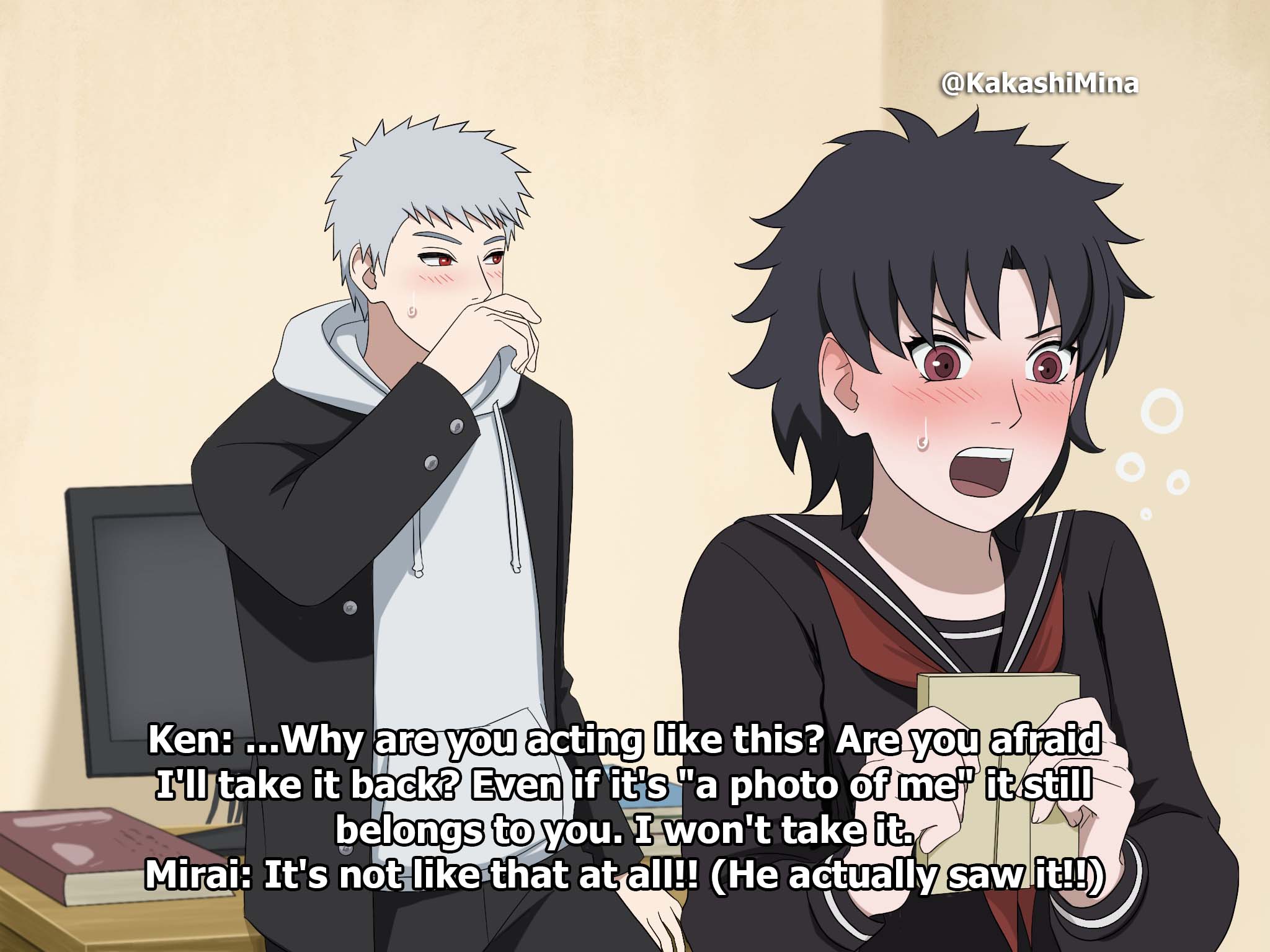 Ken: …Why are you acting like this? Are you afraid I’ll take it back? Even if it’s “a photo of me” it still belongs to you. I won’t take it. 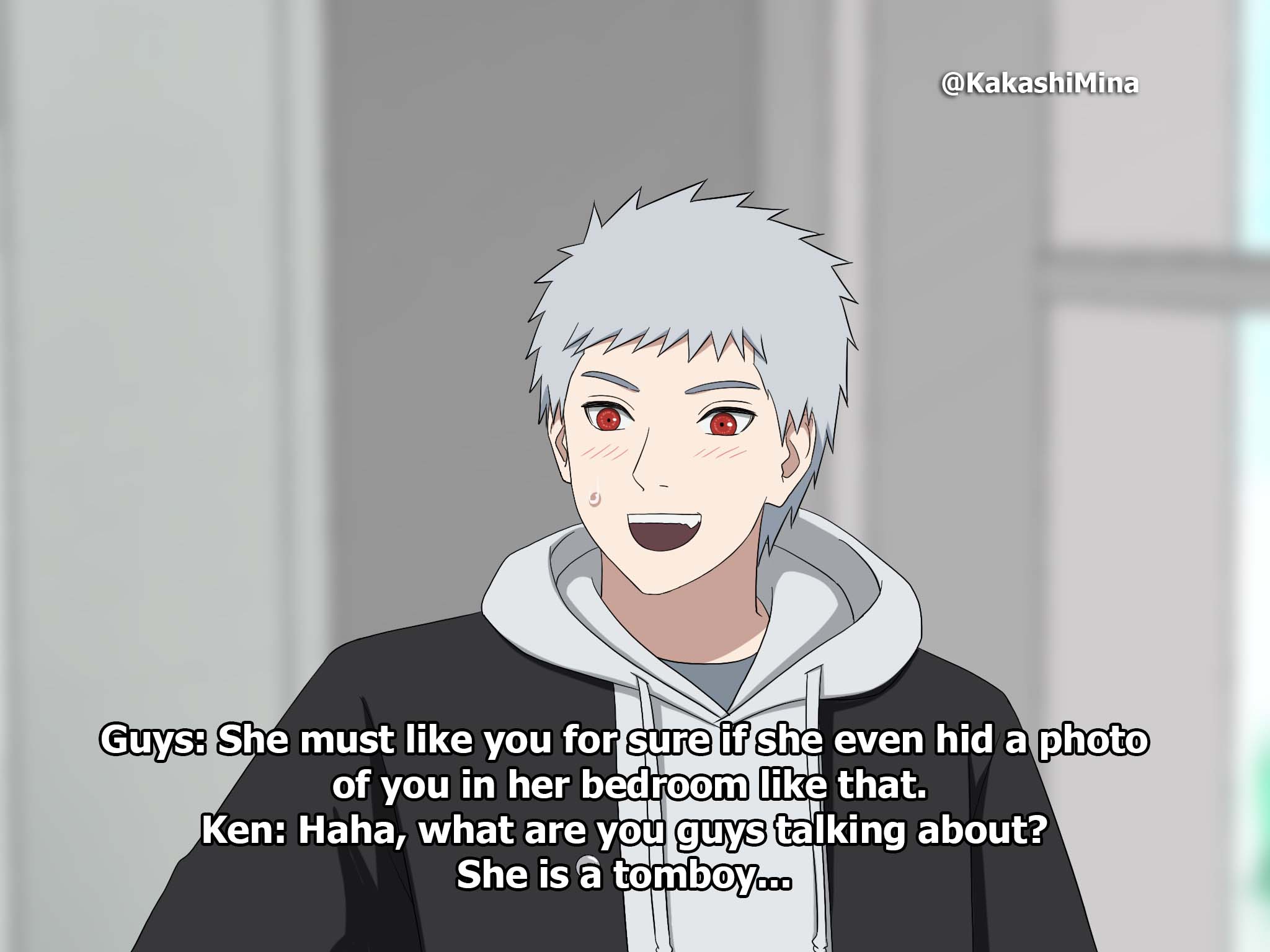 Guys: She must like you for sure if she even hid a photo of you in her bedroom like that.

Ken: Haha, what are you guys talking about? She is a tomboy… 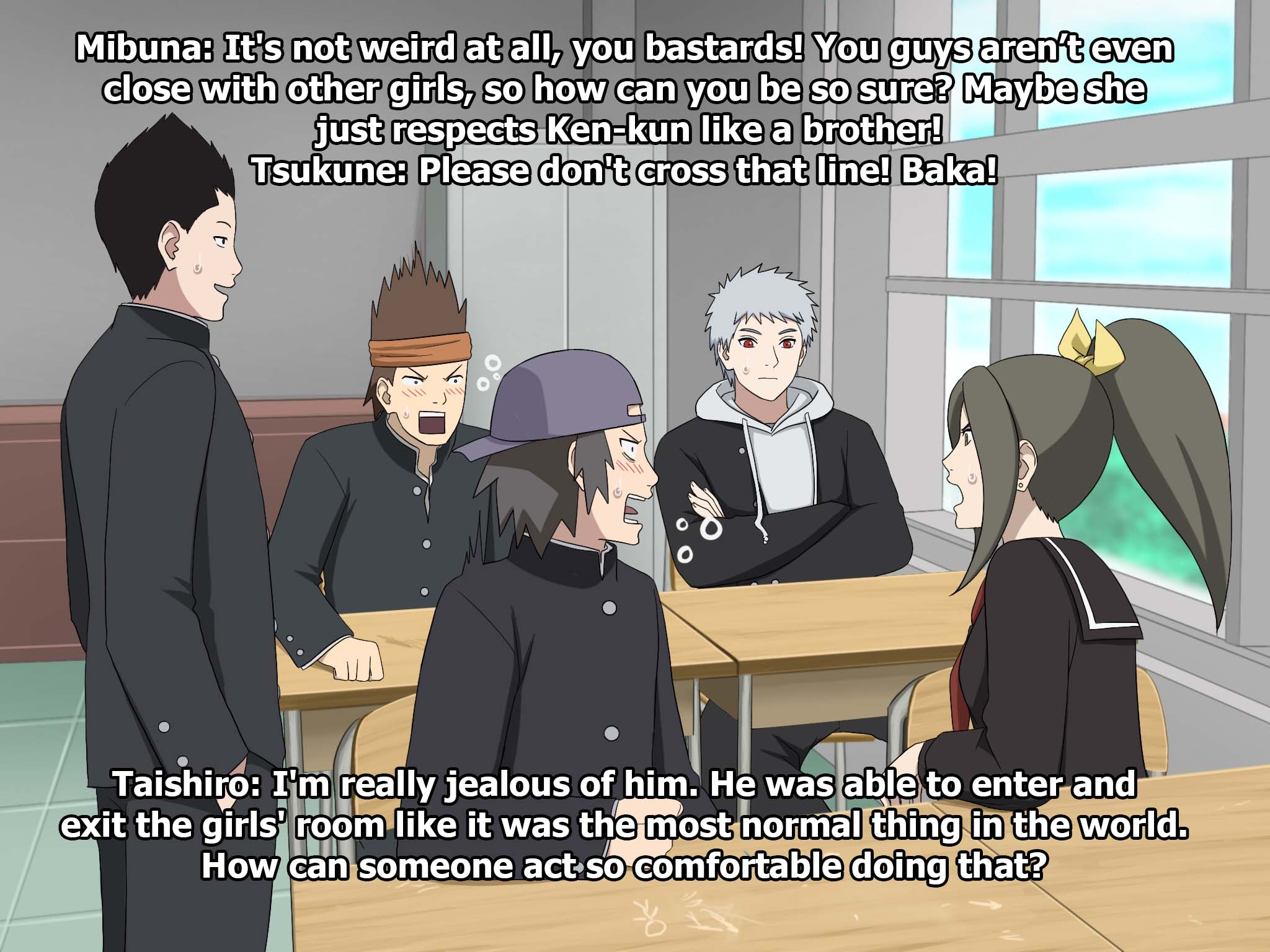 Mibuna: It’s not weird at all, you bastards! You guys aren’t even close with other girls, so how can you be so sure? Maybe she just respects Ken-kun like a brother!

Taishiro: I’m really jealous of him. He was able to enter and exit the girls’ room like it was the most normal thing in the world. How can someone act so comfortable doing that? 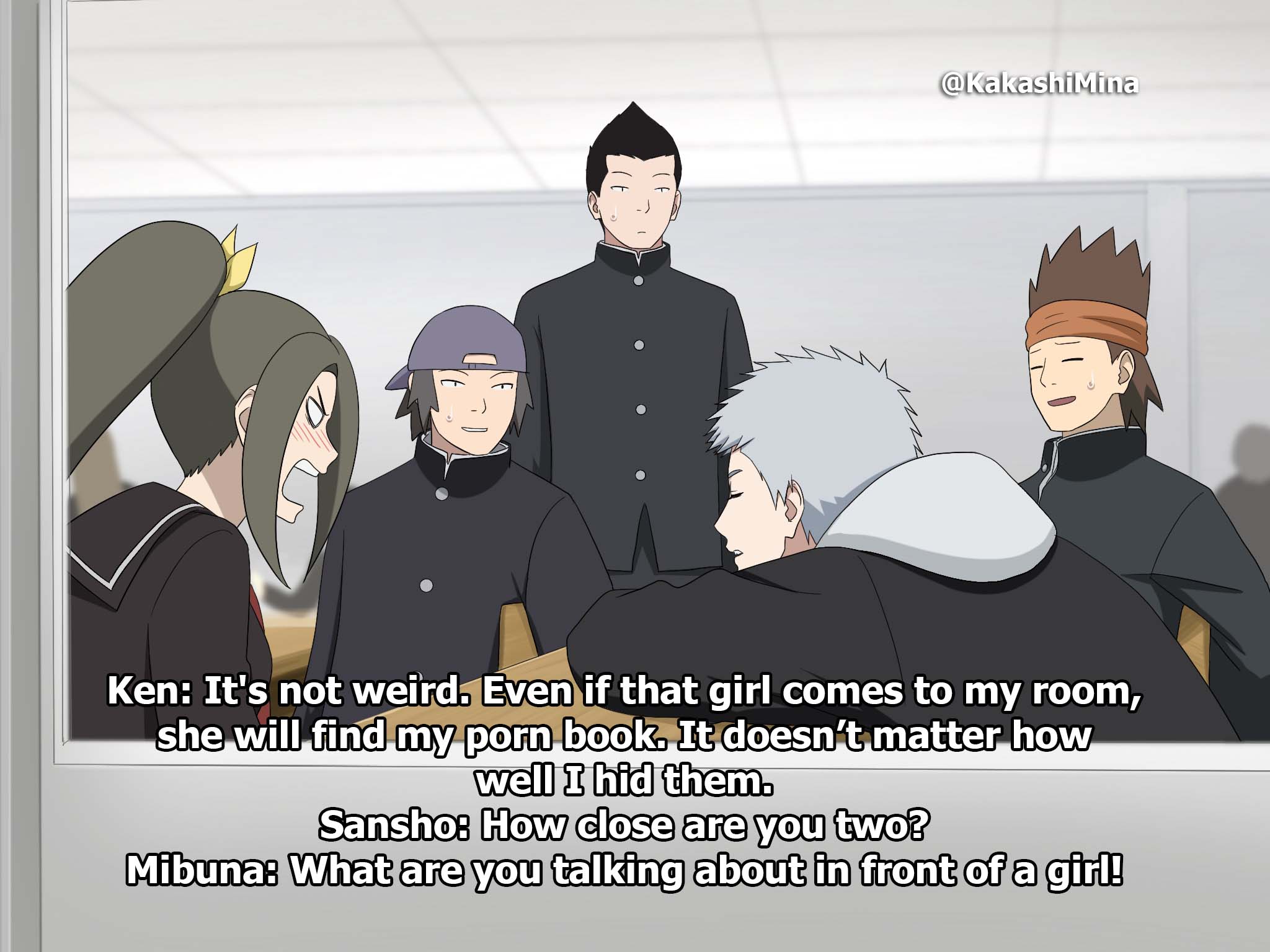 Sansho: How close are you two?

Mibuna: What are you talking about in front of a girl! 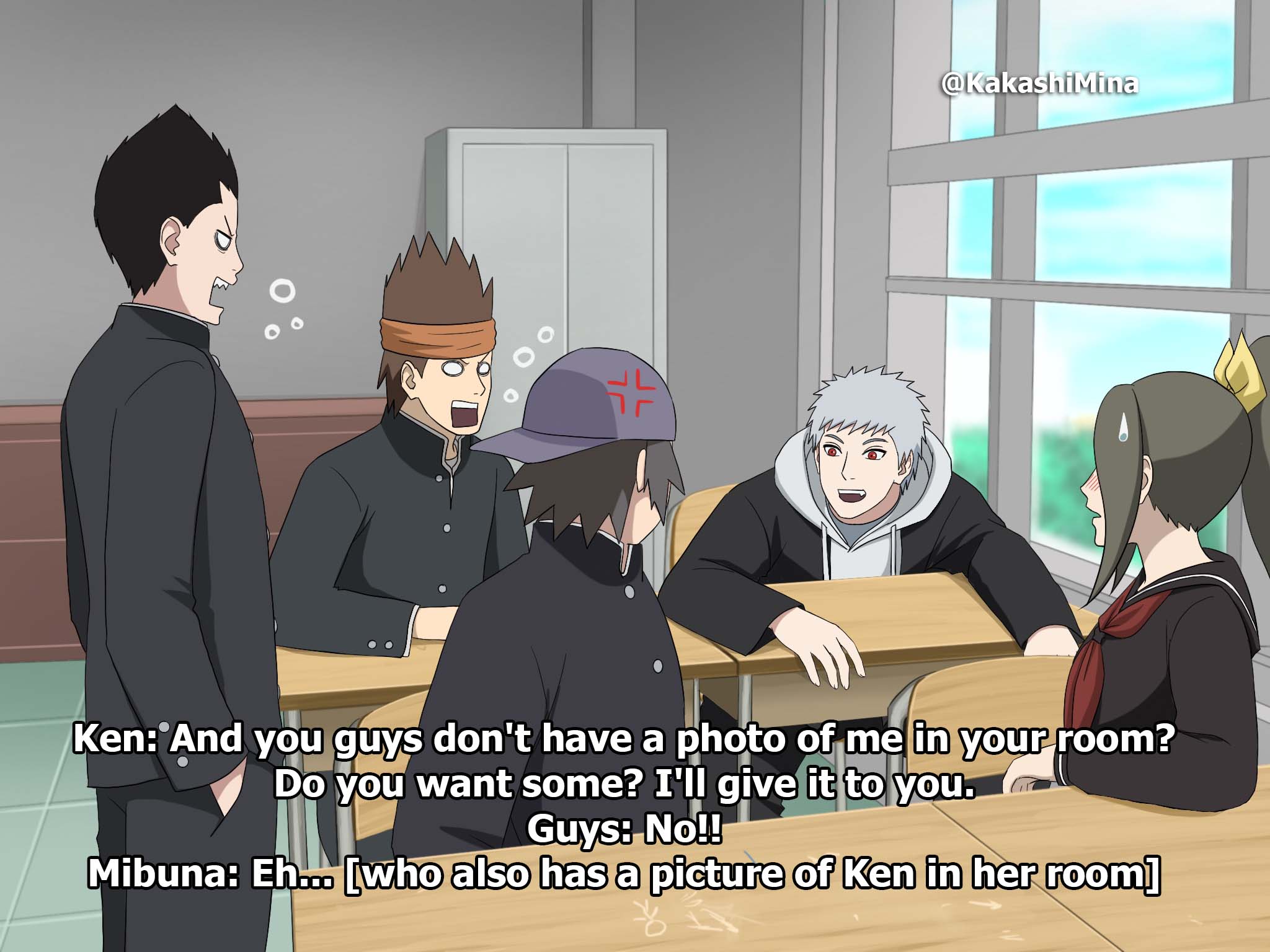 Ken: And you guys don’t have a photo of me in your room? Do you want some? I’ll give it to you.

Mibuna: Eh… [who also has a picture of Ken in her room]

Why don’t you try something about obito also…… Like obito and rin having daughter and she is having crush on ken or something like that….??

Because in the kakashi/mina chapters/episodes that she made before ken was introduced, it pretty much follows the events in the original story of Naruto, but this fan fic has the focus of kakashis life with mina through out those events. So obito/rin/minato/kushina all die like in original naruto.

hello, author I want to ask about Pain's Assault Arc if you make a scene where Kakashi fights with pain but he loses and what will be Mina's reaction to what happened to kakashi ?? I want to know what will be mina's reaction? Will you make a manga or episode? I'm really hope that you can make this scene that kakashi will see his father and they talk about his family? I really hope that you can put this in your future works about this��. I do really love your so much and thank you !!!

Thank you very much! It’s a great idea.
But unfortunately at that time Ken was only 1-2 years old.
So Mina had to protect him all the time. and they have to stay in the shelter hidden. She didn’t know what was happening outside at that time.